Ive been trawling the internets for better builds for my 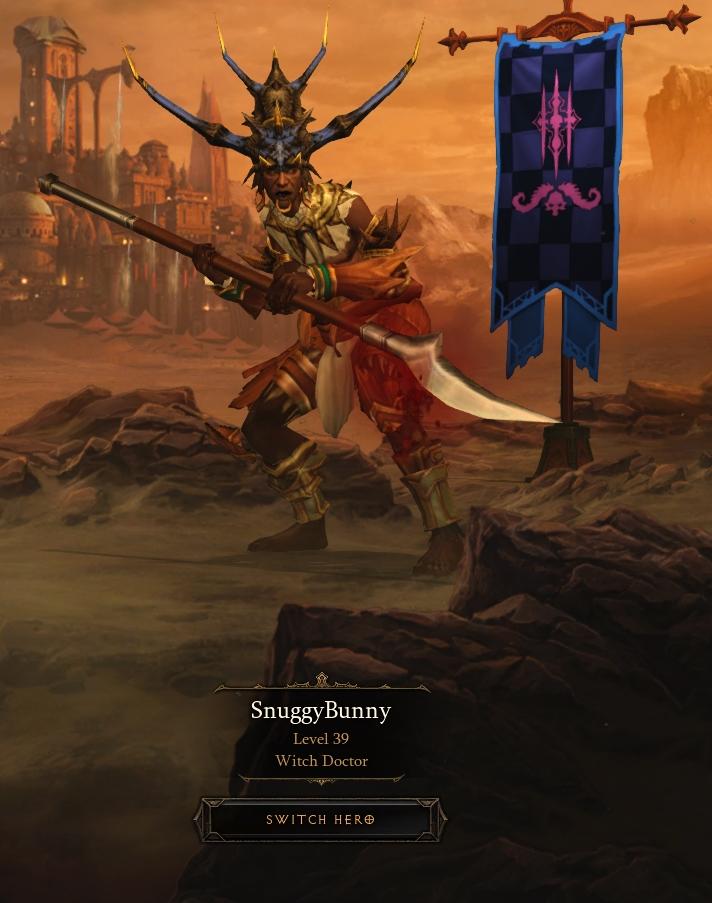 First thing is you need the best weapon you can get. This often means the best two hander you can find. This might not make sense as you might think the Witch Doctor needs a shield or the special shaman carriable shrunken head totems. All your spells, pets and skill damage per second is based off your attack so to hit the hardest with everything you need the best weapon you can aquire. I also recommend going to the auction house if you have a hard time finding a good weapon through grinding. I can't stress enough how much you need a good weapon that deals a ton of DPS. Don't worry about taking more damage, if you have good enough armor and are kiting well damage shouldn't be too much of a problem in most scenarios.

That said, this build takes some time to perfect so don't expect you will master it on your first try. It took me a bit to get used to how to use it. After I learned it I was destroying mobs with ease.

My current build is as follows:

1. PRIMARY: Poison Dart w Splinters Rune. Hits pretty hard and with it you can focus on baddies when you need. Pretty much useful in most cases.

2. SECONDARY: Grasp of the Dead w Unbreakable Grasp Rune. Seriously, this is one of the best abilities WD has. Slowing your enemies down to 80% is epic. If you are not using this in any build of your WD you are really harming yourself. Often times there is a choke point in maps, dumping this on it and backing off to pick off enemies is magic. Seriously, learn to master this ability it is very good.

HOTKEY 1: Fire Bats w Dire Bats Rune. I never understood how powerful this ability is until I understood that it goes all the way across the screen. Being able to be at a distance and send this at 5 guys charging for you can kill them in a one shot if everything is in your favor. Coupled with Soul Harvest this is insta-death to mobs. Ill explain more about that next.

HOTKEY 2: Soul Harvest w Whatever Rune you want. Soul Harvest coupled with other skills is insta-death to certain mobs. Basically it allows you to "Feed off the life force of nearby foes" which basically gives you 88 int * bad guys nearby. So if you harvest from 6 foes, thats 88*6=568 int for 30 seconds. I am using a Rune that ups that to 60 seconds. So sending out dire bats can in certain situations one shot mobs and drop yellows in Nightmare in a few hits.

HOTKEY 3: Big Bad Voodoo w Rain Dance Rune. Basically you drop a AOE totem that lasts for 20 seconds that returns you 98 mana per second. Practically speaking that means if you have the right passive abilities turned on for 20 seconds you will not run out of Mana. Coupled with Soul Harvest and Dire Bats ive been able to drop things in seconds.

HOTKEY 4: Fetish Army w Fetish Ambush. Fetish Ambush rune causes all 5 fetish folk to deal 250% damage on spawn. So if you get ambushed or rushed, I cast this and it deals everyone a fair amount of damage and then I nuke.

Spirit Vessel: This reduces the cool-down of Soul Harvest.
Jungle Fortitude: This reduces the damage you take by 20% Useful because I don't roll with a shield or carriable, just epic two handers.
Spiritual Attunement: Max Mana increased by 20% and it regens 1% faster.

This build is epic fail for mobs in Nightmare so far. I am not saying its perfect, but its a pretty fun build. I wish some kind of pet build was as good as this, but so far they are not that viable for me in Nightmare. If you know of any, id love to see them.

Can't take credit for this build, its based on this post and tweaked some to fit my style: