I read a cool article on gearboxity that featured the new 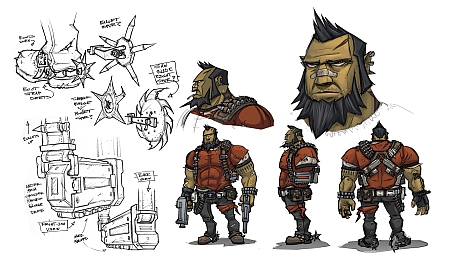 I read a cool article on gearboxity that featured the new Gunzer from Borderlands 2. They interview Paul Hellquist, Creative Director for Borderlands 2 as well as Scott Kester the Concepter Designer and Jonathan Hemingway the Game Designer. The article is note worthy because it traces the evolution of the Gunzer design over the project. I don't see that in interviews so it seemed radtacular.

"The Gunzerker started as an action skill in a long list of potential action skills. The draw of dual wielding in our gun-centered game was immediately very strong. It was an idea that was kicked around during the development of the first game but with all of the other major challenges turned out to be one that we couldn't tackle at the time. Once we starting thinking about Borderlands 2 and decided that we wanted include dual wielding as an action skill we then needed to identify the action skills for the other classes before we could do anything else."

Here is the article in question:
http://www.gearboxity.com/content/view/892/33/