Thinking About the World of Ruin 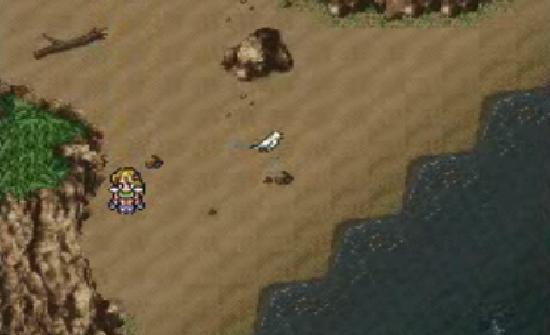 To celebrate today's Retro Tuesday I decided to write about an aspect of Final Fantasy VI that I had rolling around in my head. Its odd to remember when I was still surprised by things that happened in video games. One such event happened when Kefka causes the world to become out of balance and it falls into ruin. The sequences as the world breaks were pretty shocking to me. Many people died as the world broke up and I remember being really shocked by the carnage it showed. By today's standards it is pretty tame as it was in glorious 2D, but lately I have been thinking about how powerful that sequence was and how I responded to it at the time.

After that destruction sequence you play as a relatively side character to that point and "start over" on a small island. The game continues this bleak trend for a bit as you nurse a friend back to health and, like many things in Final Fantasy VI it doesn't turn out well.

I think the game gets a bit more interesting after the World Collapses though, as maybe in the end I find hardship to be something easier to latch on to. The relationships get more interesting, some of the most unique characters come out of the wood work and the game opens up a lot more. I enjoyed Link to the Past in that you could always warp back to The Light World from the Dark World, something Final Fantasy VI doesn't allow. But I think that works to its advantage as then the destruction and change of the World wouldn't have been a permanent thing. For Kefkas actions to have weight things had to change.

The game itself is fantastic and has many more awesome moments but this is the part I have been thinking about lately.

I find what you mention to be a recurring trend in FF games, and Japanese sci-fi/fantasy in general. The heroes fight to try and stop the disaster from wrecking the world around them, fail, and must now fight to defeat the enemy anyway. Pick your favorite Anime/Video Game to come out Japan in the last 20 years and it generally ends up with the Kingdom/City/World/Secret Base getting badly damaged by the bad guys before the good guys finally get retribution.

Interesting. I haven't played a FF game in the last bit so ill take your word for it. Was interested in FF 13 though.

FF6 is my favorite game in the series, excepting possibly tactics. We did 2 episodes about it, our first 2 parter, and it holds up so so well. http://duckfeed.tv/woff/10

A quick note: FF6 has a segment I think perfectly encapsulates the best that video games have to offer. The scene where you are exploring the world as Celes after the cataclysm is all elements working in concert in the service of mood.

1) Graphically, the world is darker now. Not so much in the overworld but the towns and bleaker.
2) The music is sad, haunting, vaguely dissonant and memorable.
3) And this is the coup, the gameplay backs it up. The overland enemies are weakened and dying. They start the battles poisoned, you often can't even kill the enemies before they die of the ill defined blight.

Perfect segment in a wonderful game.

Yeah I agree Gary, good points. Its an interesting transition because the game goes from this epic world scale set of events to only being about being on a small island helping your friend survive. Its a really refreshing interlude to the gettin' back to saving the world thing.

Ill checkout those episodes, thanks!