News from the Gearbox panel at PAX East! 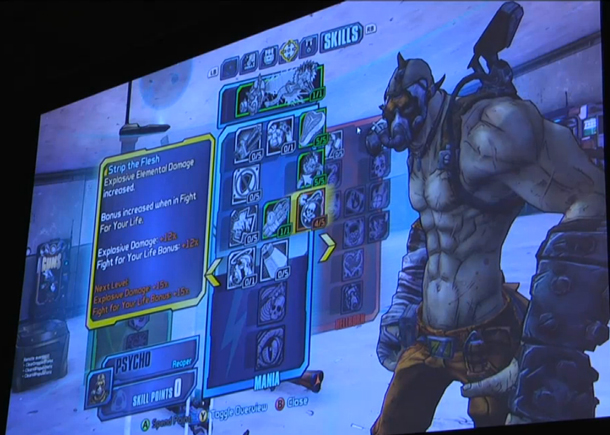 I watched most of the Gearbox panel and read up on the stuff I missed. Some exciting stuff coming!

First, next week there's a new playthrough being added for everyone. In addition, a content pack including a level cap increase to 61 and a new class of weapons, Pearlescent. This will be free to season pass subscribers, and $5 otherwise. That said, if you don't buy the new pack, good luck surviving a third playthrough.

Kreig is the new vault hunter, releasing in May! He's a bandit psycho who gets rewarded for doing crazy stuff in battle. He'll cost $5, the same as Gaige, and will be entirely separate from the season pass. As rumored, he is melee focused, and has a pretty badass-looking axe. His skilltrees are Bloodlust, Mania, and Hellborn.

So this looks to be a major shift in how you play the game. With a Siren teammate dealing fire damage to Kreig and using her skill to heal him as well, he could be an unstoppable force. I can't wait to give him a shot!

Finally, the fourth campaign DLC was teased, though nothing firm about the details. The teaser video only showed the original vault hunters and Tiny Tina playing a D&D type game. Amusing, but nothing about the content of the DLC. It seems everyone who works on Borderlands, the core team and the DLC team, worked together on this one to make it the biggest DLC Gearbox has ever released. It should release in June, and *will* be included for season pass subscribers.

Update: A capture of the teaser has finally shown up online. Worth a watch for the amusement, but again, it doesn't give much in the way of details for the DLC: https://www.youtube.com/watch?v=ka4lipQen6w

They also gave out some shift codes for 3 golden keys! Get 'em while they're hot!

In addition, Gearbox is going to start selling a Diamond Plate Loot Chest through ThinkGeek, Forbidden Planet, and their own store. It's a limited run of 5000 units, and in addition to some awesome physical items, you get a deck of cards with codes to get in-game versions of some cosmetic and legendary items. It's $100, but it's going to be hard not to nab this. Full details at Polygon: http://www.polygon.com/2013/3/24/4141972/borderlands-2-diamond-plate-loot-chest-launching-in-may-for-100

Not part of the Season Pass? Huh. I don't know if I would have done that but there we are.

The guy looks amazing and I can't wait to get all the DLC in one shot. Kind of held off on the season pass, now it seems like ill wait a bit longer for all of it wrapped up together.

The new character isn't, but the new campaign DLC is. I'm editing my post to reflect that.

And that's the same way Gaige worked, but if you pre-ordered the game you got her for free. They were pretty up-front with the season pass that it would be for four campaign addons, so I hold no ill will against them for that.

Also editing the post to add in some news about the loot chest, which looks beautiful.

And added a video for the teaser.

Fair point on the DLC, but.. I don't know on one hand YAY more Borderlands 2. On the other hand Yay the game costs about a hundred bucks to get everything.

Again, cool to hear about more stuff for sure.

Yeah, I've been kinda hating DLC in general lately. I've pretty much decided to wait until almost everything is released to get back into BL2 (at least my main character), because my Assassin's Creed 3 mode, for example, has passed and even though the new Tyranny of King George DLC interests me, I can't get motivated to play it.

I can't hate it too much, since this *is* all stuff developed post-release, and I don't really feel like my $60 was wasted on just the game itself. I just almost wish that we would get everything and then it's done with the exception of major expansion packs, like the Shivering Isles for Oblivion. The periodically released smaller DLCs just don't hold my interest as much.

I used to wait to buy this stuff until the GoTY was $60. I might consider doing that again for certain stuff again. For some stuff, I totally am, like Max Payne and Farcry 3.

Dishonored is well worth the wait ;)