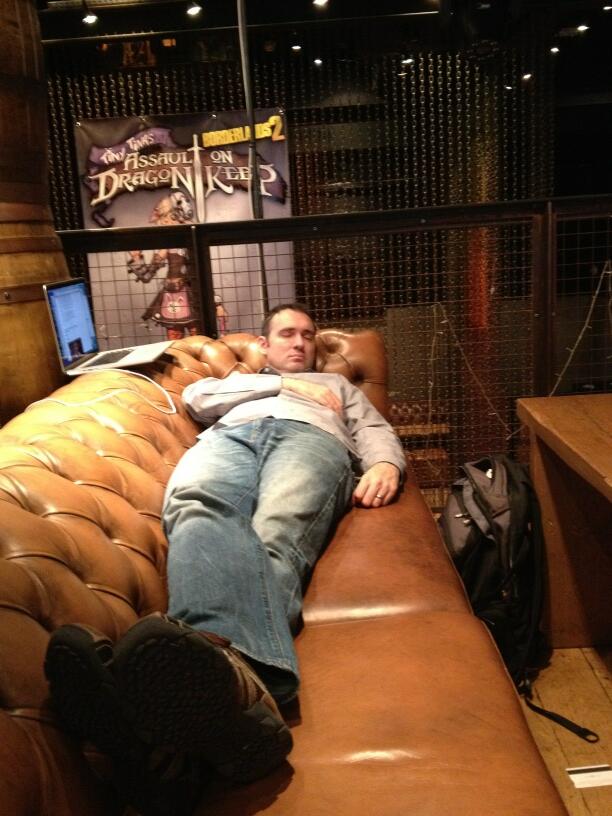 Anthony Burch, whether intentionally or accidentally, tweeted this picture of a guy sleeping at Gearbox earlier today. It was quickly removed, but some fast people snagged it before it was taken down. See that in the background? Tiny Tina's Assault on Dragon's Keep.

In the teaser earlier this year, we saw Tiny Tina leading the vault hunters in a D&D style game, and this looks to fit with the theme. There are already theories on what "Dragon's Keep" might be, some even going so far to propose that this is the title she gave to the Hyperion Moon Base.

So there you have it, take it with all the grains of salt you have. I'm personally looking forward to whatever comes out. I decided to stop playing the game until the last (planned) DLC came out, so I'm excited to get back to it!

Unfortunately now we just have to wait until June 25.

Yeah, this is pretty funny. But at least we know what it is now. And yeah, this looks pretty cool.

I have to wonder if they announced it today just because of the accidental tweet. I'd come up with some conspiracy theory about the tweet and subsequent removal being intentional if it weren't announced only hours later.

That could be. But they also get nearly every game site talking about the next BL2 expansion regularly. Not to say this couldn't be some attempt in that direction.

Either case, BL2 DLC! I wonder, is this the last BL2 DLC we will see now?