Duke Nukem Forever: Is it really that bad? 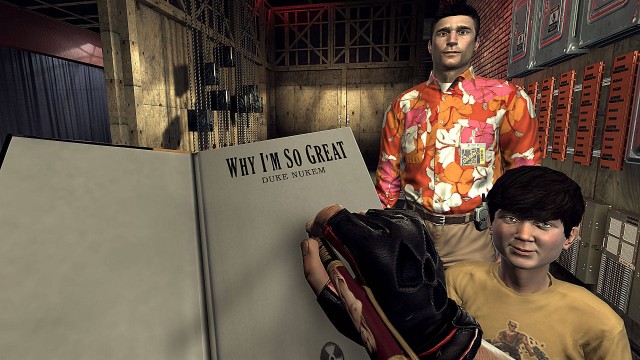 I've been doing a bit of an experiment over the past week, playing games that have been pretty severely panned to see if I can find the positives. So is Duke Nukem Forever as bad as everyone says it is?

It's not great. I wouldn't go so far as to call it a bad game, though. It's a good game that got bogged down over 12 years of development, ideas that nobody seemed to want to cut, a switch in development teams, and a change in the climate of games.

Really, it's the most disappointing kind of game. All the elements are there, the mechanics are good, the level design is at least acceptable, nothing is broken, but it's just kinda boring.

The game starts you off fighting the final boss from DN3D, and while I can remember the adrenaline flowing when I fought that boss years ago, I really felt nothing in Forever-- you just run around in a circle waiting for ammo drops, then shoot the boss while continuing to strafe in a circle. But, it was meant as an intro level, so I can cut it some slack.

What happens afterwards is less slack-cuttable. What little the intro did to build up momentum is totally lost in the boring 30 minutes to follow: It's 12 years later. Duke is a hero, and has a massive tower-mansion where he has shrines to himself all over the place, and two twins to service him (and yes, I mean "service" in that way). As expected, the aliens show up again. So what does Duke do? Heads to a talk show appearance. Signs an autograph. Punches an asshole stage manager. Has a conference call with the president and a general where he's instructed not to fight. Only then does the fighting actually start.

The shooting mechanics are good enough, even the driving mechanics are serviceable, but the pacing never seems to get back on track and never begs you to keep playing. The graphics are decent enough, but were definitely showing their age by the time the game was released. The voice acting is good, or I guess as good as it can be when you're dealing with this script. There's some humor to be found, but most of it is just juvenile.

Maybe it's because I was in high school, and I'm blinded by the nostalgia, but even playing DN3D now, the humor and crass jokes seemed to be handled better. In Forever, it seems that 3D Realms was trying to make a more offensive parody of the Duke that was. "Let's take Duke Nukem 3D and make everything more over-the-top!" Maybe I've just grown up, and can see things more realistically now, but this game is seriously trying too hard.

And that's basically the problem. Duke Nukem Forever is Al Bundy. A shoe salesman who can't move past his glory days as a high school football star. You'll get some enjoyment in listening to Duke Nukem Forever tell stories of the glory days, but it's a better use of your money to find a game living in the moment.

I actually wondered about this one myself. I think there is a line between a wink and a nudge camp and just being terrible. Seems like this game is on the mostly terrible line.

I think I'll keep playing it, maybe. Eventually. It may be worth $5, I think that's how much I paid. $.99 absolutely.

I'd build a shrine to Travis. Travis, send me a picture of your head I think thats the first step to that.

Snag it from the Hangout On Air. :D

I played through the game, it's been maybe a couple of years so maybe that's why I can't quite remember why I didn't like the game as much as I thought I would. I do remember that for a while, I didn't play the game unless I was drunk. Hahahaha. Maybe the game just seemed too over the top, too offensive or in bad taste to me. DN3D was awesome and I really loved it. I can't say the same about Forever. I was a bit disappointed with it and have only played through it once and I'm not sure I'll do so again.

Overall I think I like it. It is pretty vulgar. At...