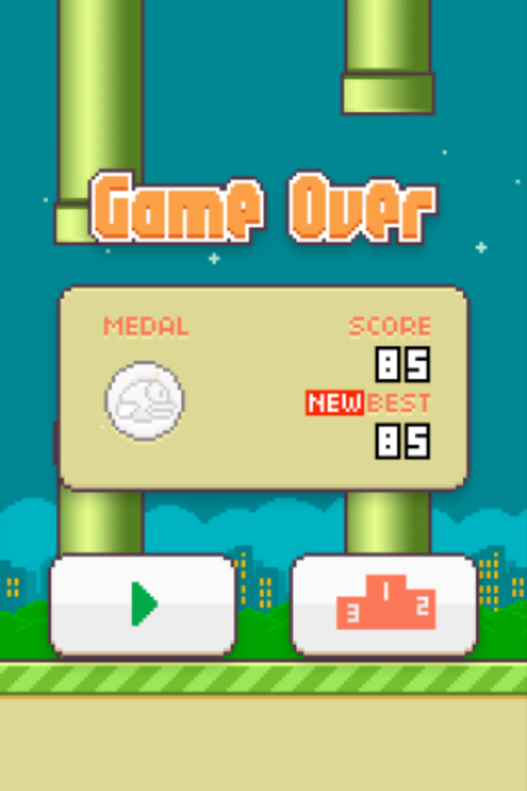 The somewhat reclusive creator of Flappy Bird recently accepted an interview with Rolling Stone. In it, he discusses the ups and downs of creating a hit mobile game.

I have to admit to a slight addiction here, folks. I've criticized the game and Mr. Nguyen on the site before, and I still stick by those criticisms. The game is derivative and unimaginative, and its creator handled criticism very poorly. I still believe that. However, upon the news that it was being removed from the various app stores, I re-snagged it just in case I changed my mind. Well, I have. Kinda. The art is incredibly derivative, going farther than just homage, and the mechanics are identical to a game that's a decade old, but the game is still damned addictive. It plays very well on the human need to see a number go up, and the difficulty sits right on the same Super Meat Boy edge of what is too frustrating.

All that being said, it's interesting to hear from Dong Nguyen about what's been happening in his life. Some of the messages he received are just mean, and some were concerning to him. At all the criticism over the addictive nature of the game, he said "At first I thought they were just joking, but I realize they really hurt themselves." The feeling of success could easily be negated by thinking you've legitimately hurt someone with your creation. I mean really, if you had 10,000 people singing your praises and a single person who mentions failing responsibilities due to something you created, which are you likely to listen to?

The decision to take the game down makes more sense now, and I'm glad he agreed to a rare interview. If you managed to miss the game and want to play the original (not one of the thousands of clones), there's hope. Mr. Nguyen has said he may put it back up, but if he does there will be a Wii-style reminder that you should take breaks from it.

The full interview can be found at Rolling Stone: http://www.rollingstone.com/culture/news/the-flight-of-the-birdman-flappy-bird-creator-dong-nguyen-speaks-out-20140311

That's my personal high score in the image, by the way. Beat it if you dare!

Yeah, I can see why he took it down. People getting addicted coupled with the Internet Hate Factory, it would be a hard ride for anyone.

Kind of happy he might re-launch the game. If only to stem the zillions of clones!