No Man's Sky Review, One Year Later: It's All About Depth 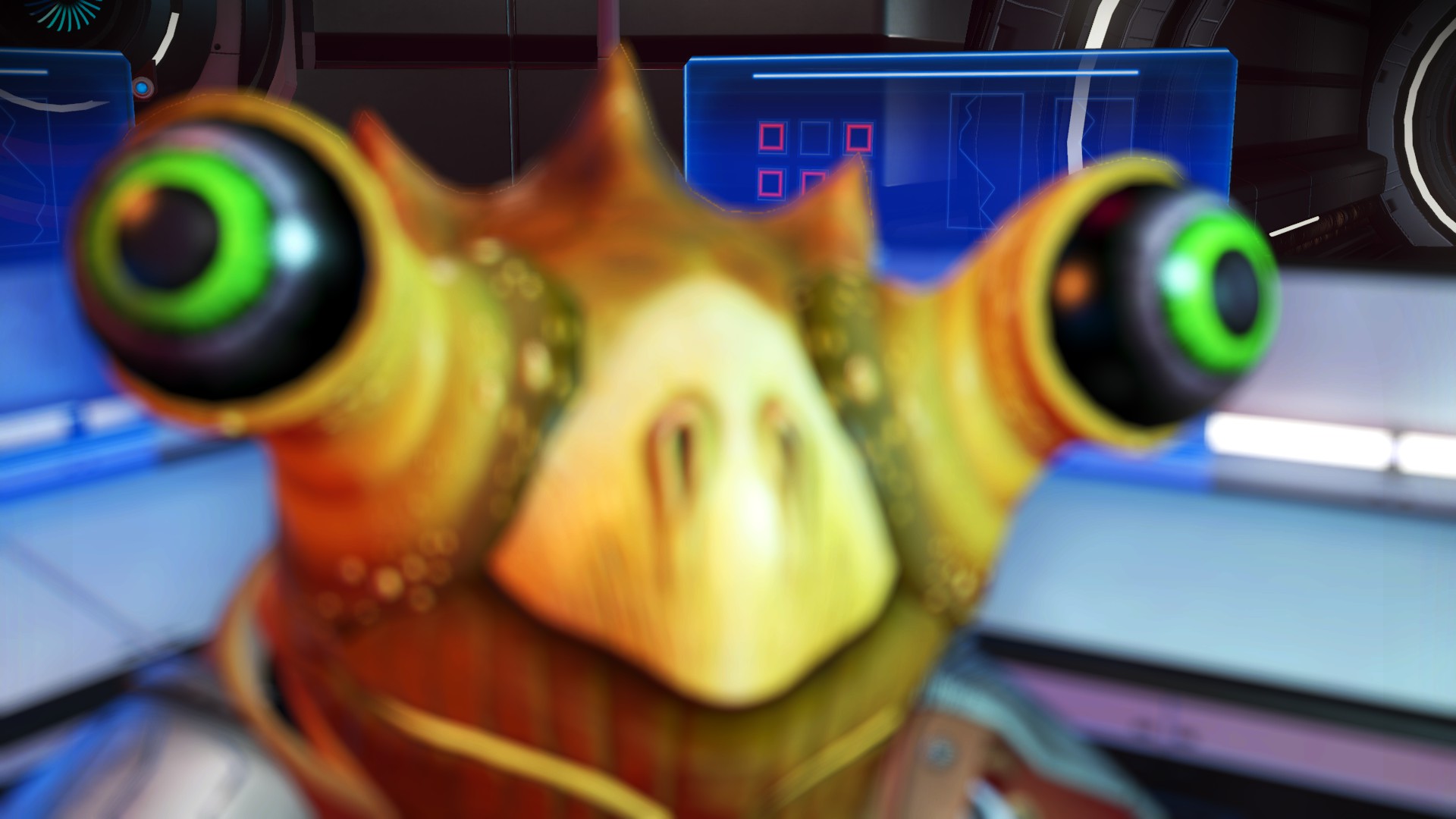 Travis gives this a solid "Rad" on the Ghost Scale
This is fun, with very few issues, and is well worth your time.

Travis gives this a "Rad" on the Ghost Scale
This is fun, with very few issues, and is well worth your time.
(This review does not contain spoilers past what the release announcement discusses. If you want to go in totally blind about new features, please consider skipping this one.)

After the third major update, Atlas Rises, No Man's Sky is what it was meant to be.

A common criticism of the game was that it's as wide as the ocean and as deep as a puddle. I never thought it was that dire, but the depth has improved dramatically. A game with "Mostly Negative" reviews on Steam has achieved "Very Positive" recent reviews for the first time.

So what makes things different now?

First, there's a new main story, separate from the Atlas Path (which has also been tweaked). The fourth race is revealed, and you learn more about the mystery of the simulation you're in. Interestingly, there's a story reason for why multiplayer is appearing now (more on that later), and why it's only "glitches" of other players. The ends of the Atlas Path and actually traveling to the center of the galaxy still do the same things they did before, but you now have another option for how to proceed.

Second, there's just more variety in everything. There are more plant and animal types (including those giant animals from the E3 trailer), and more planet biomes. Many more blueprints to have focused and varied builds for your ship and multitool. Each ship type (including the new, rare exotic ship type) handles differently now, and comes with a set of bonuses for different types of gameplay. Different star systems have a conflict rating and economy rating to determine the danger and trade in that system.

Portals now allow you to easily share coordinates to anywhere in the galaxy and go check out other people's amazing creations or interesting planets.

Mission boards in space stations let you build up faction standing and get rewards for doing things you'd probably already be doing anyway.

Crashed freighters on planets add to the landscape and offer a way to get some loot. Mostly, for me, they make the galaxy feel more alive.

And yes, multiplayer has been added, in a limited fashion. You can see other players as a glowing orb, and you can hear voice chat within a certain radius. There's no other interaction possible, with the exception of making a lasting monument that you and this other player met. Imagine Journey with voice. The plot reason for this (as explained in the release announcement) is that the simulation is experiencing issues, so other subjects in the same area are starting to bleed through. I took a trip to the former Galactic Hub, a project started by players even before the portals were activated, on the day the hub was moving to a new location (the new update significantly changed some planets, leaving the Galactic Hub capital a bit on the cold side). There was a party in the old capital to celebrate the move, and there were tons of orbs in a cacophony at first. But after a few minutes I saw what this limited multiplayer could offer: emergent gameplay. Someone set up an exocraft race, and I watched what may have been the first real-time exocraft race.

Yes, there are other new features. Redesigned UI, tech and cargo inventory slots, lower flight capability, crafting improvements, and so on. Those are nice quality of life improvements, but for me, it's all about depth. The game now has deeper gameplay, deeper story, deeper mystery. No Man's Sky, even at launch, scratched an itch I never knew I had. But the magic did eventually wear off. Even with base building and freighters and exocraft, there was only so much you could do before it got a little boring. Those beautiful planets that were pieced together procedurally used the same set of components, and once you'd seen them all, the newness wore off a bit. Now it's so much better in every imaginable way, and the replay value has skyrocketed.

If you were interested in this game before, but were holding off to see if there were any massive improvements, this is what you were waiting for.

I often remembered that depth quote as I played the game, it felt too fitting. However, just as you say, the game got deeper. I liked it to begin with, but some things got old, like trying to scan every fauna on a planet. I don't worry about those scans as much. I like that now there is plenty to do and reasons behind many of them.

I recently deleted the game that I had going and created a new one, mostly because of your warning regarding Atlas Rises and old saved games. I'm ok with it and I think it's a great time to start over from the beginning. I'd still like to be able to use freighters to transport my exocraft to different planets instead of having to build an exobay on planets I want to ride around on. I'd also like to see Nanite Clusters not take up a space in the inventory. Other than that, I can't think of much more I want from this game. I'm not too concerned with multiplayer, but it does sound interesting. Thanks for reporting on that.

In the end, the game has grown quite well in the last year. I think it's a better game now.

> I'd also like to see Nanite Clusters not take up a space in the inventory.

Oh man, you and me both. There's still plenty of interface tweaks they could make to make things more comfortable to use, and that's on the top of my list.

I should try to remember my minor current complaints about the game. I had a bug upon trying to exit my Nomad, I was placed some distance away. I did establish a base, but wasn't happy with the planet, due to the weather and lack of land mass. Luckily, I found a much better planet and moved.

I previously had an issue, when I first tried out the Missions Board. I accepted multiple missions and had trouble finding where I was supposed to go for of them.There was no icon for it on my map. I created a new save since then and decided to accept missions one at a time and haven't run into the issue again.

I have progressed a bit into the story and I can see how deep the game got. It's like they released a somewhat incomplete game. This year they have made a lot of progress in adding some of the finishing touches, especially the story. Really, I think things are a lot more "polished" now.

The game has crashed on me at two or three times recently. Otherwise, it's pretty stable.

GeForce Experience optimizes my AA settings to Ultra-SSAA x4, but the game seems to often change it to something else. I don't even see that setting in-game, the AA options don't include that one. I guess it doesn't matter too much, I'm not sure if I've seen a difference.

Don't use GeForce experience for this one (or like... most games). With NMS they are using old settings. It'll try to "optimize" your game to settings that don't exist.

Yeah, that seems to be what it's doing.

I progressed even more into the story. I know the significance of "16" or what it means. I made it to the point where you decide which path to take; Atlas, center, or free exploration. So, I feel like I've gone through the major changes of Atlas Rises and am now back to the game as it was before. I know my old save was about a year old and even after multiple trips through black holes, I don't think I was even close to the center. How about you? Have you made it to the center?

I don't like the new terrain manipulator. I prefer the old one. I tried the new one out, but wasn't successful at it, maybe I need to get more serious with it and figure it out.

I really do like a lot of what they've done to the game in the last year. I might not be able to think of them all at the moment. I do feel like I'm spending a lot less time switching to new ships. After my first ship, I found a really big class B ship and I've had it since. It has a lot of slots, even if I haven't repaired all of them, which is another new feature I like.

What do you mean new terrain manipulator? It was brand new with 1.3. Before that you could chuck grenades to blow up the ground (you still can). Unless I'm not sure what you mean. But I don't love the terrain manipulator. Its charge runs out so fast and it's faster to grenade things to remove ground, and adding ground is tedious.

And yeah I made a mad dash for the center once I felt like I was basically done with 1.0. So you finished the Artemis path, you got the choice at the end. I won't spoil what happens at the center but I will say it's similar to that.

Yeah, I miss the grenades and yeah I finished the Artemis path.

You still have grenades!

To clarify, you may not have them if you've replaced your multitool and didn't install them in the new one. I *think* my first few multi-tools back in the day had them already built but I could be making that up.

But every time I switch I forget to install stuff until I really need it.

Cool, thanks. I probably just haven't found that tech yet.

I miss the grenades as well! Now that Nanites are a thing, it's take a lot longer to find new tech. It used to be almost every waypoint with buildings had some blueprint in it. It's probably better balanced now, but was much easier before :)

I'd be shocked if you haven't, they have those plans weighted so that you get the tech for the base components early. But, if you've been focusing on Artemis and haven't done a lot of exploring and found those buildings that give you the tech, that could be why.

I'm pretty sure I've not found a grenade blueprint yet (I restarted my game after the newest update). I believe back in the day, you could simply find blueprints everywhere, but now where I used to find blueprints, I'm finding Nanite Clusters, and I don't think to trade them in at the trade stations often, but that seems to be the main source of blueprints now.

The outposts and things with NPCs that do a speech check give you the blueprints like they used to. Sometimes you'll only get standing, sometimes credits, but it seems it's the same rotation of blueprints for the ones that do. I got a lot of blueprints that way.

And Nada and Polo still give them to you as well.