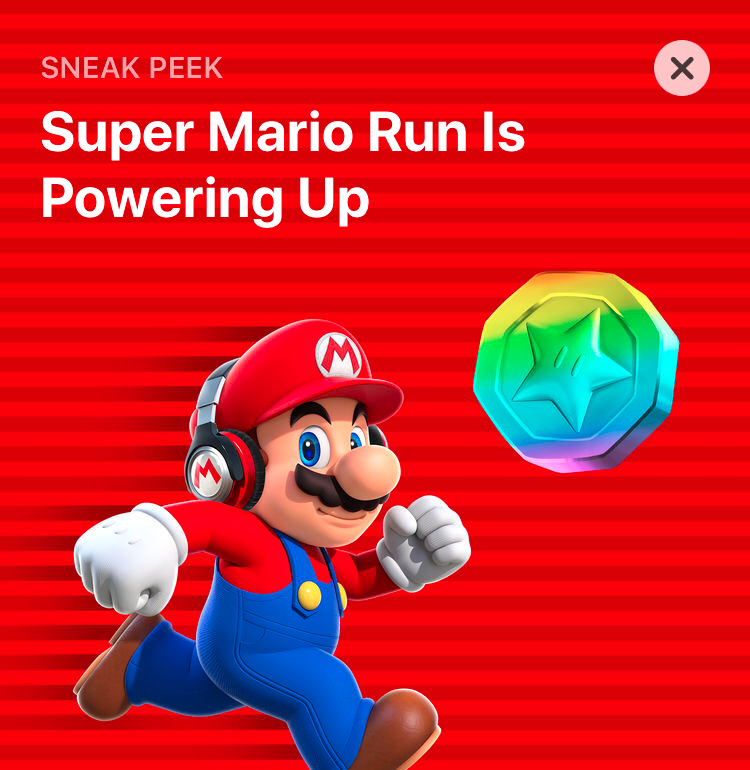 A couple weeks back, Super Mario Run dropped off of the App Store, leading to speculation as to why. It came back with an update for "bug fixes" a little while later. In that time, one player claimed to have received an update with a new game mode. Presumably, the update was released earlier, was taken down to prevent more people playing it, and the bug fix update was to get the few people who got it back to the pre-update state.

The big news from that rumor was a new mode. Here's what the source said at the time:
When starting up X 10 Run for the first time, players are told that Princess Daisy is in trouble, and it’s up to the player to rescue her. X 10 Run asks for Toad Rally Tickets to allow you to play, and consists of 10 quick, 10-second levels where the player collects three rainbow coins before reaching the Goal Pole. The more rainbow coins collected, the closer the player gets to a chance to hit a giant Rainbow ? Block that gives bigger items to be used in Kingdom Builder, such as Toad Houses. As far as our source could tell, there was no penalty for not collecting all three coins — you were rewarded just for completing the levels.

Up until now, this was just rumor, and I didn't want to write about it and get people's hopes up. But now, let me proceed to get your hopes up! It appears that the rumors were true. Apple dropped some news today about the new update, coming September 29.

Amongst the new features:

Since the news is only available on the App Store in iOS 11, someone was kind enough to screencap the full announcement:
https://imgur.com/a/Db6fw

And since that rumor is confirmed, here's the original report about what the one player who has played it experienced. Since this was released earlier than planned, things may be different from what this person experienced, but it should give you a good idea:
https://nintendowire.com/news/2017/09/05/rumor-new-mode-coming-super-mario-run/

Also, if you've been holding off on unlocking the full game, wait until September 29. There's a 50% off sale starting then, and lasting for two weeks!

I will have to dust it off and give the new content a try.

Thinking of picking it up for half off. But I still haven't completed the demo yet.

This is cool news. I look forward to checking it out again!