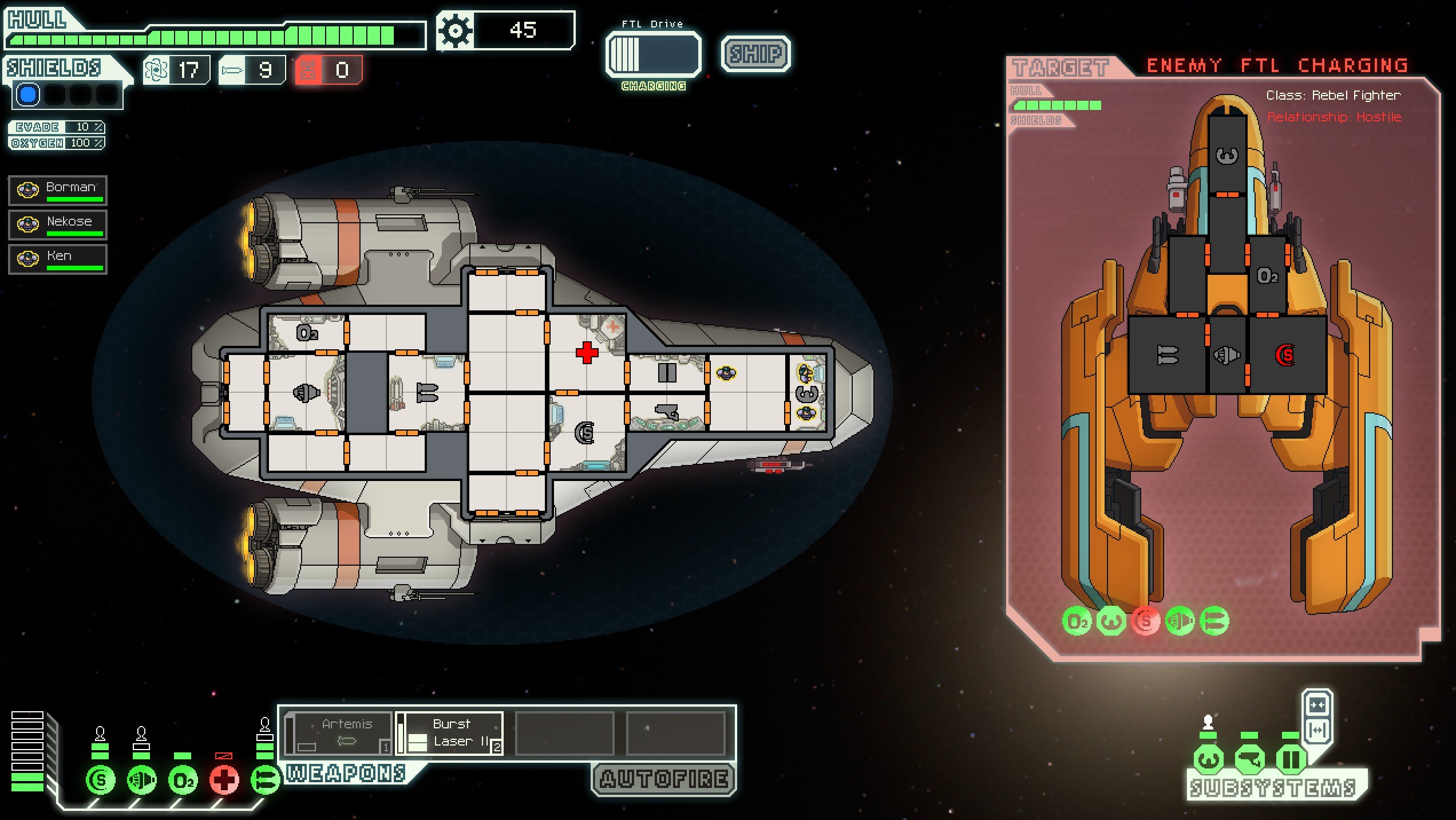 So after asking everyone which game I should play next I installed Fallout: New Vegas and started the single player mission. Compared to Fallout: 3 the intro wasn't terribly interesting. I imagine the game picks up a ton later on, but I didn't click for me right away. I will come back to it at some point though.

A few days ago FTL went on sale through the Steam Spring Indie sale and is currently $5 stand alone or $7 with the score. I picked up FTL + the score(of course) and decided to try it out. After an un-countable amount of games I can say that FTL is a must buy if you love space sims. Its a interesting take on the Roguelike game genere that dares to be fun! I guess I should qualify that a bit because I don't find many roguelikes fun. There are roguelikes I want to enjoy, but just can't get into. Its not that I don't like challenges or have a problem losing its just that certain games don't mix the "really hard" and "losing your ass off" to make it fun. But FTL does. In FTL in every game I lost my ass off and it was very fun. An epic adventure even. But realize here I play games for fun, not work, so if a game seems like work I just don't play it.

One evening of late I described FTL to a friend and recommended he give it a go. We were talking over Google Hangout and I decided to screen share the game with him. We spent nearly an hour making choices on how to play the game together and not only was it fun as hell I got further than I did on my own. I want to play FTL co-op again this way and hopefully we can do that. So yeah, if you have the ability to sit down and play with a friend, try FTL co-op. I guess you could call it "FTL Pairing" because thats a method I employ when I partner with someone on a project and we are at the same computer doing it together. Anyways, regardless of what you call it, it was fun as hell.

FTL is awesome and you really aught to try it, because, you know, space and all. You can even get unique and play it with your friends over Google Hangout too.

Trying FTL co-op by screen sharing sounds awesome. I'll have to try that with someone sometime.

Yeah, it is. I want to do it again and do a Lets Play of it.

Dude....I totally want to join you on that one.

Ok so lets do that. Ill send you an email to setup the time.

Outstanding idea! When I first read the headline, I thought I just missed reading that it had co-op. Glad I read the full story to get the full scoop.

You must have a pretty serious rig to be able to screenshare via Hangout without dropping. I was considering doing something similar for Amnesia: The Dark Descent. I have some folks who would really like to see that one.

I think one thing that helps is FTL looks like a 2D sprite game. Plus it doesn't have a ton of movement. Then again I think I did... Minecraft over hangout too. :D

I can vouch for the awesomeness of FTL screensharing - Jon took me through a guided tour of the game, and I was surprised at how easy it was to follow along with what we were doing. I played through the tutorial on my own later, and I think I'd have had a disappointing first run if the tutorial were all I'd had to work with.

I've played through it a few times since then, and gotten *remarkably* close to (what I think is) the finish line. I'm hoping for a chance to play FTL in pair-mode again with a more experienced eye and see how that changes things.

If Google hangout can stay smooth, I'm wondering if this opens a new door on the "single-player strategy game as co-op" play I enjoyed as a teenager. Myst made a remarkably good two-player experience; I wonder what else is out there that's worth experimenting with.

I haven't screen shared, but that sounds awesome. FTL is another game for me that took a bit to get into but I've clocked some solid hours on it now. It's like Oregon Trail in space to me (with a bit more skill involved). Great game.

Huh, good point on the Oregon Trail in space, I hadn't considered that before. Its the goto game in my rotation right now, so very cool.