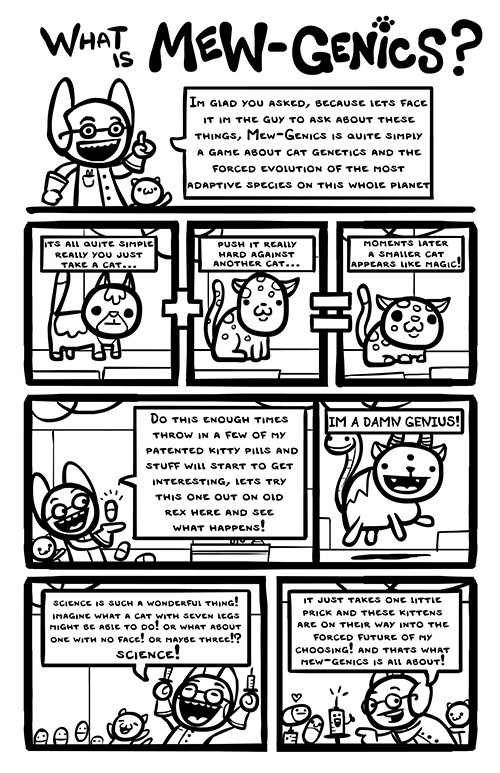 Since Team Meat announced they were working on Mew-Genics many people have wondered what kind of game it will be. Some kind of cat breeding simulator is a good start, but not many details have surfaced. Over the weekend Edmund McMillen has loosed a few more bits of Mew-Genics .. WITH PICTURES!

I seriously recommend you check it out by clicking the link below.

"as the weeks inch closer to our release, sometime next year ill be dropping in little tidbits of info, filling in all the rest of the gaps and maybe even posting some gameplay!
all in all mewgenics is currently the biggest project Tommy and I have ever worked on, and we are both going all in on a game genre we aren't even sure exists... "

Can't wait to find out more about Mew-Genics as it is one of the games at the top of my "most anticipated" list. Mew-Genics is planned for a PC/Mac & Tablet release sometime in 2014.

Every time I see a post about Mew-Genics, I get more excited!

But I still don't really know what I'm excited for!

Seems kinda like the Creatures games? Of @CapnCurry's Halloween story?

I think you might be right. It looks like a sandbox with a story of sorts focusing on cat breeding. Seems like there will be many reasons why you might want to do this, not withstanding it sounds like a creepy amount of fun. I think it's good they are being so coy about what it is, I mean I bet they know more than I do...

That said, I can't wait to ... breed strange cats?