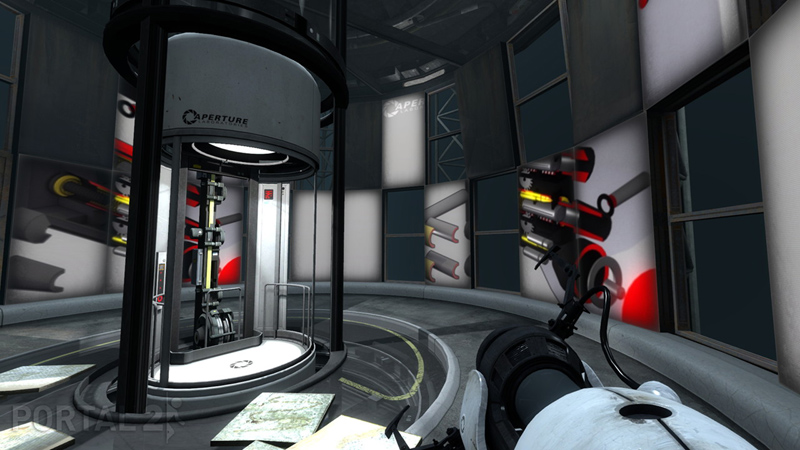 I just completed Portal 2 after playing it over a few sessions this weekend. For quite some time i've wanted to relive some Valve classics and on a lark, I decided to pop in my PS3 disc and give it a spin. From the start, Portal 2 is an engrossing dystopian tale where you wake up after countless years to a Aperture Science facility in ruins. Featuring a talented voice cast consisting of Ellen McLain as GlaDOS, Stephen Merchant as Wheatley and J.K. Simmons as Cave Johnson the game is full of amazing moments and great character pieces.

I figured the game would look a bit dated on the Playstation 3 but Valve's look for Portal 2 is beautiful in 720p. For comparison I loaded up the game on my Mac and even though the Mac version looks considerably better, the Playstation 3 version didn't disappoint. Some games were meant to be played sitting on the couch with a controller and in my opinion, Portal 2 is such a game. Since Portal 2 isn't a twitch shooter I don't mind the casual nature of playing it on a console.

The Playstation 3 version of Portal 2 needed a few updates but after that process I was up and running. My only gripe about the whole endeavor was that the games load screens were slightly annoying(an issue only on the console version) and that my saves didn't sync with my Steam version. Then again, when I have my Steam Machine the save game sync problem should be resolved.

Portal 2 is one of those games I tag in my mind as a classic and as such will come back and replay it every couple years. I really enjoyed replaying this classic, can't wait to see which one I play next.

Valve's games don't age. That's one thing you have to give them. Half Life 1 still holds up to the gameplay test even if the graphics are a little dated. I still have a much fun with it now as I ever did. I'm thrilled with the Black Mesa remake, because the improved graphics may make it more approachable.

More on your topic though, Portal 2 could have been longer but it was so much fun. I played it once in about two days and immediately started another game.

After the first one I was a little worries the second wouldn't live up to the first, but it couldn't have been a better sequel.

I really enjoyed the length and think other games could do well to riff that. It's simple and can be completed I. A few sittings. They could have added some more puzzles I suppose but I really loved it as is.

To put it a different way, Portal 2 is all killer and no filler. I am thinking of writing another post talking a bit about it.

If you interested in picking it up, check out the first Single player challenge time I just set. :D