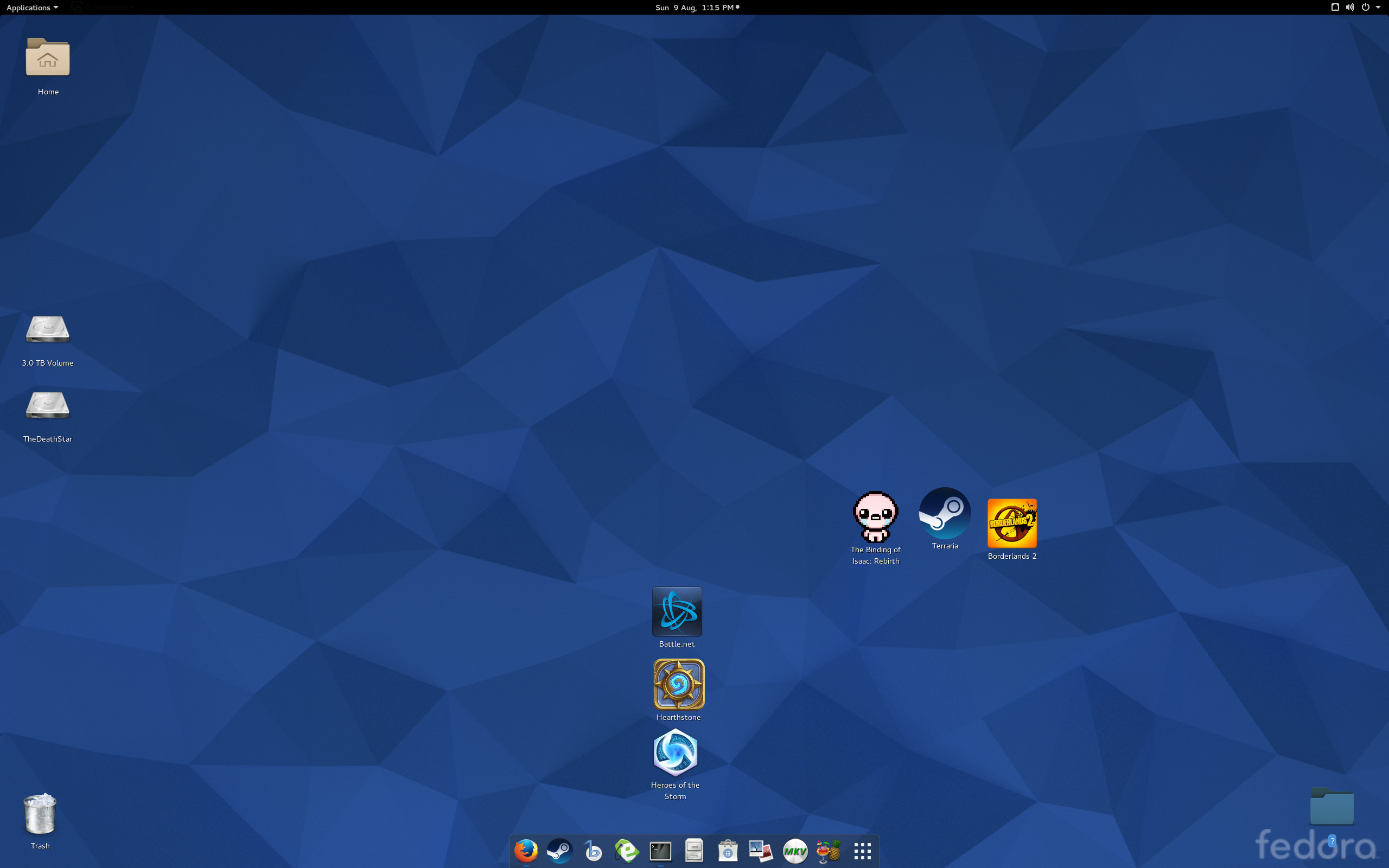 I've been using Ubuntu Linux as my primary Linux Desktop since it's first version, Warty Warthog. Fun fact, Travis and I first met as moderators for the Ubuntu Forums website and have been friends since. In my opinion, Ubuntu has been the best Desktop Linux for years and recently have I felt that position change. I don't want to get into a Linux distro war debate but needless to say, over time, the changes Ubuntu has been making to it's system have annoyed me. I don't particularly enjoy the Desktop they are creating or the direction they are headed. That said, I applaud them for all the hard work and as a many years loyal Ubuntu fan, leave with a lot of respect for the project.

I've been looking around for a new Linux to fill my needs as there are so many to choose from. Mint Linux aims to fix much of the strange direction Ubuntu is going, Arch seems to be a very modern take on a DIY distro for power users and Fedora Linux has always been something i've wanted to try more of. After acquiring a Fedora 22 USB install drive from OSCon this year, I decided to give it a spin in a Virtual Machine and was very happy with the results. So much so that over the next week I re-imaged my PC with a dual boot of Fedora 22 and Windows 7.

One common complaint I hear from folks is that Fedora and other Red Hat RPM based distros suffer due to package management. This was very true a few years ago, but in my experience this has all but evaporated. Want to install Handbrake, Steam or Banshee? Install the RPM Fusion repository and use the graphical program to do it. I did have to drop to the console to do a few things, but I find that to be par for the course on any Linux distro I install. I cataloged all my steps in a Github gist you can read below.

Those steps will get you all you need to get Nvidia drivers & Steam running as well as tweak your fonts to look a bit nicer than the default settings. I really enjoy the Gnome 3 Desktop and I have also included steps in that gist to make it work more like a traditional Mac-like Desktop with dock and menu bar. Gnome 3 is a great Desktop it just has a few odd defaults and after you turn them off I works better(I think).

Video game performance on Fedora 22 is about what I've come to expect from Linux, which is to say very good but not quite as great as Windows for some games. Fedora 22 packages a good version of Wine so I got Battle.net to run alongside Hearthstone and Heroes of the Storm. Occasionally Hearthstone lags a bit but it doesn't make matches unplayable. Over the years Wine has gotten great at emulating Windows software and seeing how well it works now, gives me hope for future non native Linux gaming.

If you are looking for a nice way to start out on Desktop Linux Fedora 22 ain't a bad way to go. You could always try it out in a Virtual Machine and if things go well install it on a spare PC. That said, some of what you love in Fedora comes with SteamOS and over time I imagine that may become my primary Linux Desktop. Until then, Red Hat's bleeding edge community distro is a strong option and I have really enjoyed using it.

What distro did I start out w/? I think Red Hat, that was back in the late 90's. I've tried a few others in that time, but Ubuntu was one of my recent favorites (circa 2005). However, I later didn't like how the UI changed.

Fedora was the distro used in a class I took at my local community college. The class was working towards Linux+ certification, which I didn't attempt, but aced the class.

It's been a long time since I've dual-booted Linux. I do it sometimes, but don't end up playing around with it very long.

@Will I think that I might try it a bit later. For now, Fedora is full featured and has a path for it being a very good Desktop OS. SteamOS isn't officially released yet, but when it is I will check it out for sure.

SteamOS is still really rough around the edges, and I don't think will ever be the best idea for a desktop. If you get SteamOS and install all the stuff in it to make it a desktop, then a quicker way would be to just install Debian and then put Steam on it. The big customizations coming from SteamOS are just simplifying ways to get your drivers up-to-date, providing a way to immediately boot into Big Picture mode, and a few hooks from Steam into the OS so you can customize things straight from Steam. All of these, aside from customizing the OS from Steam, are done easily in a desktop Linux distro. And Valve has said that, while you can install anything you want, the bare-bare-barebones desktop environment is there basically so you can more easily tweak things.

In fact, even Valve thinks using it as a desktop OS is a bad idea: https://www.youtube.com/watch?v=gWaG9hOvNn0&feature=youtu.be&t=7m23s

Thanks for the info, Jon. I'm Linux illiterate, so it's always nice to read trusted recommendations. Will definitely read up on Fedora.