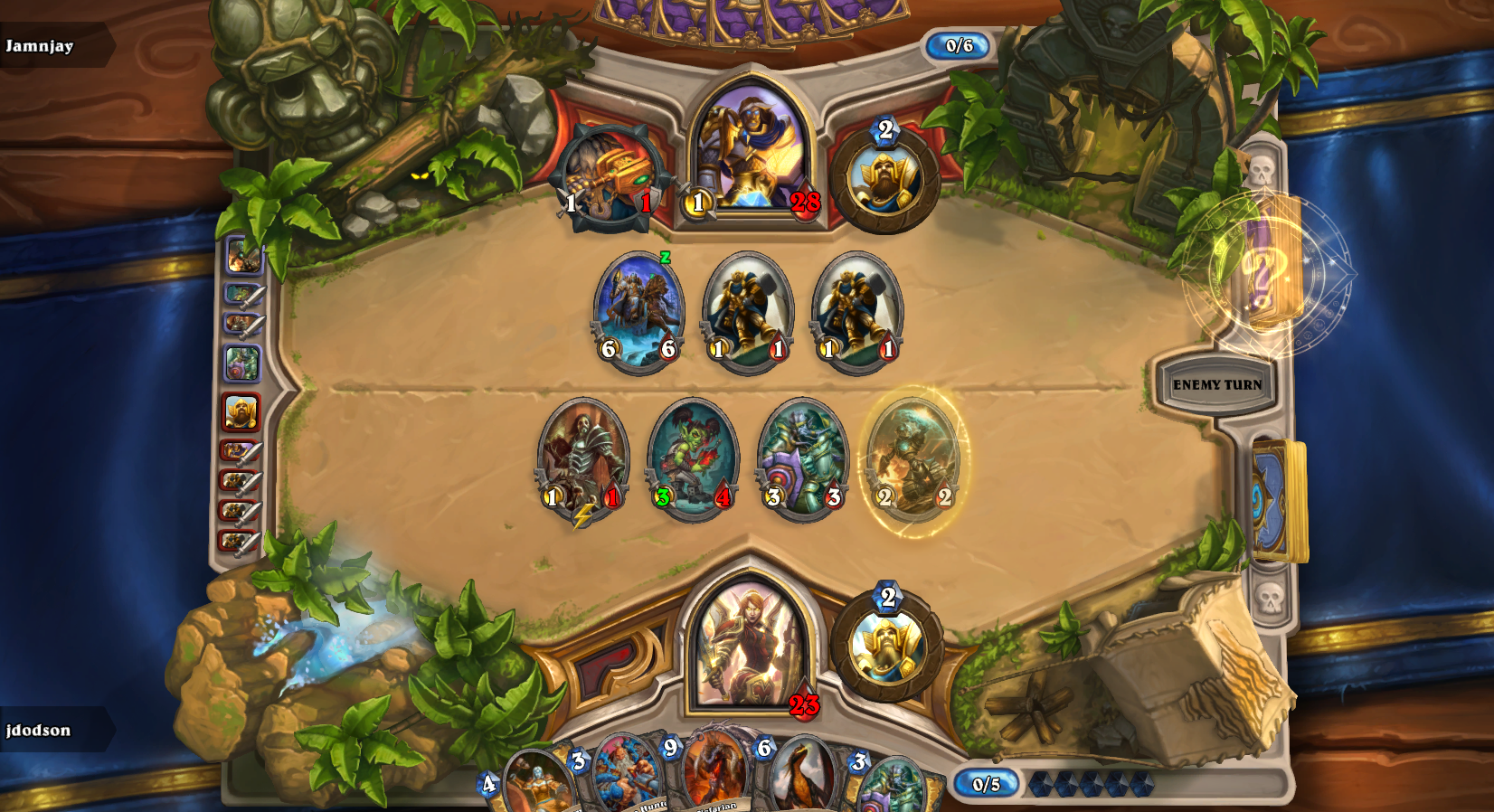 Currently there are 4 alternate heroes you can play in Hearthstone. If you want to customize your hero experience and stand out a bit the heroes are a nice option. Since I am a free to play Hearthstone user I haven't bought any of the new heroes though I enjoy matches where my opponent is using them. Recently Blizzard released a new Lady Liadrin hero for Paladin and this one was unique in that to unlock her all you needed to do was get to level 20 in World of Warcraft.

I love the idea of simply playing another game for free to unlock something in Hearthstone. When World of Warcraft launched a free starter edition I played up to level 8 and never felt a huge draw to play beyond that. Partially it's because MMO's are best experienced with friends and I played it mostly single player and also because it really didn't draw me in.

All that said, I am a Hearthstone nut and the thought of unlocking a hero for free was too compelling to pass up.

Doesn't Everyone Get Addicted To World of Warcraft And Have It Ruin Their Life?

We've all heard horror stories about how MMO's ruin relationships. It's a common tale in gaming i've taken to heart in that I have mostly tried to steer clear of playing MMO's. Not to say I haven't played Lord of the Rings Online or Guild Wars 2 but with those experiences I always monitored how much I was playing and how that was effecting things. I had a couple weeks were I was immersed in either Guild Wars 2 or Lord of the Rings Online but for me it wasn't anything like the horrors we've all read about. But before I started playing WoW to level 20 I did wonder if WoW was gonna ruin my life. Turns out I was totally wrong.

World of Warcraft Isn't My Thing.

I feel bad for saying World of Warcraft isn't for me because I love Warcraft Orcs and Humans, Warcraft 2, Warcraft 3 and Hearthstone. How couldn't I love World of Warcraft? It's it just Warcrack injected directly into your nerd soul? Shouldn't that be my kryptonite?

Well as it turns out it's not but I did enjoy the first couple levels and the associated quests and grind. But after level 5 things get fairly stale quickly. The story blends into the background and the quests are very repetitive. The art, music and gameplay are well beyond polished but even so I just didn't find it very much fun.

After level 10 my quest to unlock Lady Liadrin became something I didn't enjoy. I heard someone once say "It's not work unless you'd rather be somewhere else" and if that is true then World of Warcraft is work. At least, again, it was for me.

I did enjoy a few things though. I rolled an Undead Warlock called SnuggyBunny and I thought the abilities and spells were neat. He was a tailor and I found it fun to make a few outfits that I wore for an hour or so but I quickly discovered items that replaced my handmade ones and I couldn't level up my tailor ability quickly enough. I imagine this is due to my lack of understanding of the games system, but there you have it. Starting an Undead character is fun and Blizzards design for the undead, their cities and characters is very creative. Running quests for Lady Sylvanas was fun as I remembered her unfortunate character turn from Warcraft 3 and they integrated her and the story of the forsaken well.

I was happy when I reached level 20 because the game started getting much more difficult which was a nice change of pace. At the point I hit 20 I couldn't continue due to the Starter Edition level 20 cap but at that point much of the game seemed to open up to me. I wonder if the game gets more fun after level 20 but it's something I might not ever experience as I have little desire to try my hand with the game again. If there were another Hearthstone cross promotion I might head back but next time i'd like to try a different class I might enjoy more.

In the end two great things came from me playing Word of Warcraft. First is I unlocked Lady Liadrin and playing her in Hearthstone and that alone was well worth the time. Lastly, I realized that I am immune to World of Warcrack and it's tempting ways and my relationship still stands strong even though an article to the contrary would have been way more interesting to read.

I was playing Ark recently and mentioned in global chat that I've never played WoW. The person was surprised. That said, even though I haven't been playing Hearthstone, when I found out about this bonus, I was a bit tempted. I'm still a little tempted as I might get back into the game.

Right away, I think you nailed why I might not enjoy WoW so much. I'm used to solo gaming, single player mode, etc. I played Ragnarok Online with friends and it was fun (except I hated that other people would steal my loot that dropped from enemies I killed). I played FFXI, but I started off so far away from my friends that we never met up. That game was definitely not for solo gamers. I did play a little bit of Guild Wars 2 (obviously), but I never really saw my fellow Cheerful Ghosts and I was on my own pretty much.

Right now, I'm playing Ark: Survival Evolved on an official server. I wouldn't really call it an MMORPG, but I mean it's very similar. The maximum amount of people that can play on a server at a time is 70 and the one I play on is often about half full. I enjoy it much more than I thought I would and I'm really glad I'm still playing.

Anyway, thanks for letting us know about your WoW experience! I hope the new Hearthstone unlock that you got is cool.

It's been 8-9 years since I was really playing WoW, but for me it was mostly a single player game. I had a buddy help run me through the beginning, and then I had some friends come and go as I played. I actually made a few friends through the game that I'm still friends with on Facebook.

Talking with Jon as he's played a bit has kinda made me want to go back and experience the game a bit. Would anyone else here be interested in a WoW free run to level 20? (Lol, right after I said I normally played the game on my own) Maybe I'll start up an event if people are interested :)

When Jon mentioned he was starting this, I thought about joining him. However, Ark has a firm hold on me. I could possibly take some time away, but I don't know.

I wonder if we could get a group together and dedicate a Saturday, how far could we get in just one day?

Hahaha I'd say it's a definite "I don't know." Are you talking about starting out from the beginning? Are you wanting to do it for the Hearthstone bonus? I might jump in Hearthstone again, but probably not until I watch Jon's Dailies videos.

A bit of info on jumping in with only the Starter Edition. Because of spamming and gold traders and such you can't friend anyone in game. You also can't message anyone. So if you want to meet up or chat you will have to do it in an outside program and simply find each other by hand on the server.

You can't even friend people in the game? I remember that free accounts couldn't send/receive gold/items, but now they can't even talk to others? That sucks.

That's crazy. I played WoW when it released. Preordered game. I played dark age of Camelot (another mmorpg) for years and half my guild was going to WoW. I wasn't alone, we leveled up decently. I even did some pvp during the free trial. But, I never tried past the 4 week free trial. In fact, I let my brother play the final week of the game.

It's crazy to me that they grabbed the market so forcefully and took off. I played a star wars mmo (before kotor3) 3 times as long and that game flopped.

That said. I'm thinking of doing quest to get the hearthstone unlock too. I've paid for all the others. Should probably get this one.

> It's crazy to me that they grabbed the market so forcefully and took off.

I have some friends that have been hooked by it, but like you I don't see the appeal for myself. It just doesn't click.

> That said. I'm thinking of doing quest to get the hearthstone unlock too. I've paid for all the others. Should probably get this one.

After playing with her for about a week now I can say my time was well spent in WoW unlocking her. Curious when they are adding other heroes and if I can play StarCraft or Heroes of the Storm to unlock them?

I'm pretty annoyed with the ios exclusive $5 mage hero... I use Android and couldn't get it

> I'm pretty annoyed with the ios exclusive $5 mage hero... I use Android and couldn't get it

Yeah, exclusives are not great for that reason. Sometimes when companies mean "exclusive" they don't mean forever, so maybe he will come back for everyone at some point?