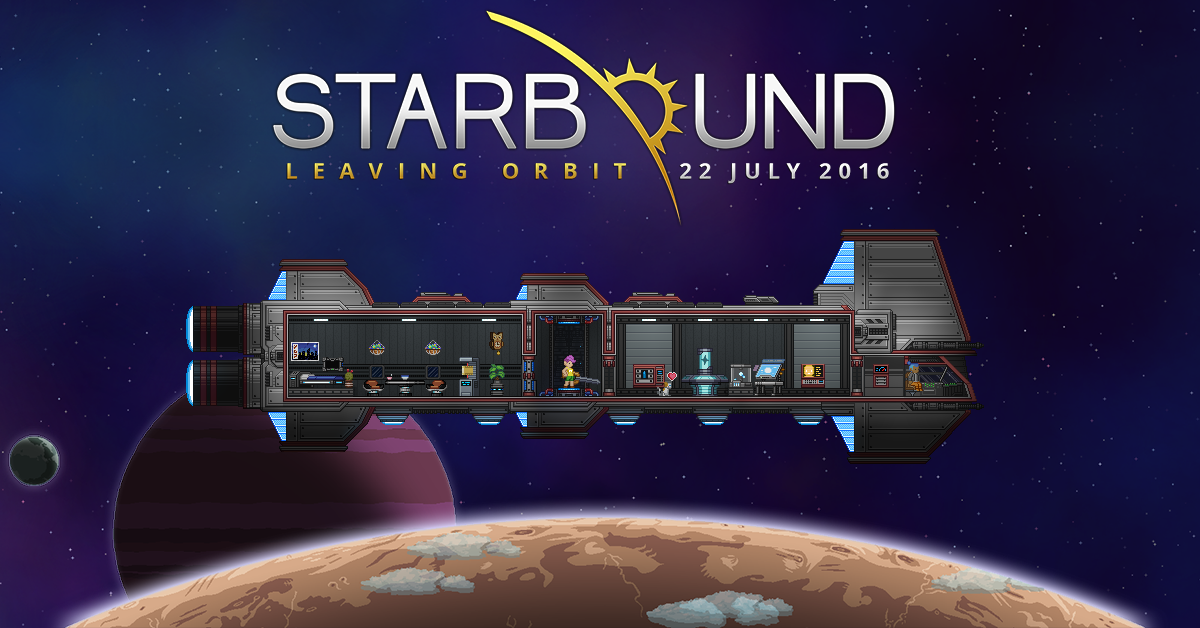 Chucklefish is finally releasing Starbound 1.0 coming July 22nd. After making a huge early access splash, Chucklefish hit a few snags with some pretty large delays and as such garnered some community backlash. I am happy to see the game finally hit this milestone and as such am really eager to play it in it's final form.

After ~5 years, the game we set out to make finally exists, and to say that it all feels a bit surreal would be a massive understatement!

While Starbound will be finished in two weeks, this isn’t the end. We will continue to update and support Starbound for as long as we can. We’ve got loads of cool ideas we couldn’t fit into 1.0 but hope to put into future updates.

Thanks again for all your support over the years! You’ve stuck with us, and it means so much."

I almost can't believe it! I have been waiting it out, but I'm stoked about playing the gold release.

I do wonder about those features that didn't quite make 1.0. I wonder what's in store.

I thought of reporting that as I found that news earlier. :)

I played through so many versions of it that it feels more like Starbound 13.0.... but there hasn't been a new stable in a loooong time, so I'm looking forward to it again

I played it quite a bit at launch and then checked it out one or two times after that. It always got better but it didn't seem to hit the level of greatness I expected it to. Since then lots has happened to the base game and I am really looking forward to checking it out and seeing how the base game works with the new story mode and quests.

I've played it a few times. The first time wasn't too impressive as there wasn't much to do, but it got better. I ran into some bugs, too. Now I'm itching to play again. It's very tempting, but I'm afraid if I do then I won't be as excited about 1.0 by the time the 22nd rolls around. Recently, I decided to check up on Starbound's news and that's when I found out about the 1.0 date. Initially my favorite race to play was the Avians, but then I played some Novakids and enjoyed them, too. I'm interested in finding out what's changed since I last played. I imagine, at least, there's a lot more quests now. I don't know if I played it after they introduced pets though.

Finally an update! "Starbound will launch tomorrow at 10am PST / 6pm GMT"
http://playstarbound.com/starbound-1-0-steam-workshop/

Wow. It's launching today. I hope it's really fun.

Launched! I played for a bit, it definitely seems different right from the start. There never was a story or an intro mission when I played before. A lot has changed since I last played. I watched the trailer, too, and it looks like a whole lot has been added. I'm glad the wait is over. There's probably more to come in the years ahead, too.

This will be the mod that makes the game infinitely better: