It's Been 20 Years Since Valve Was Founded 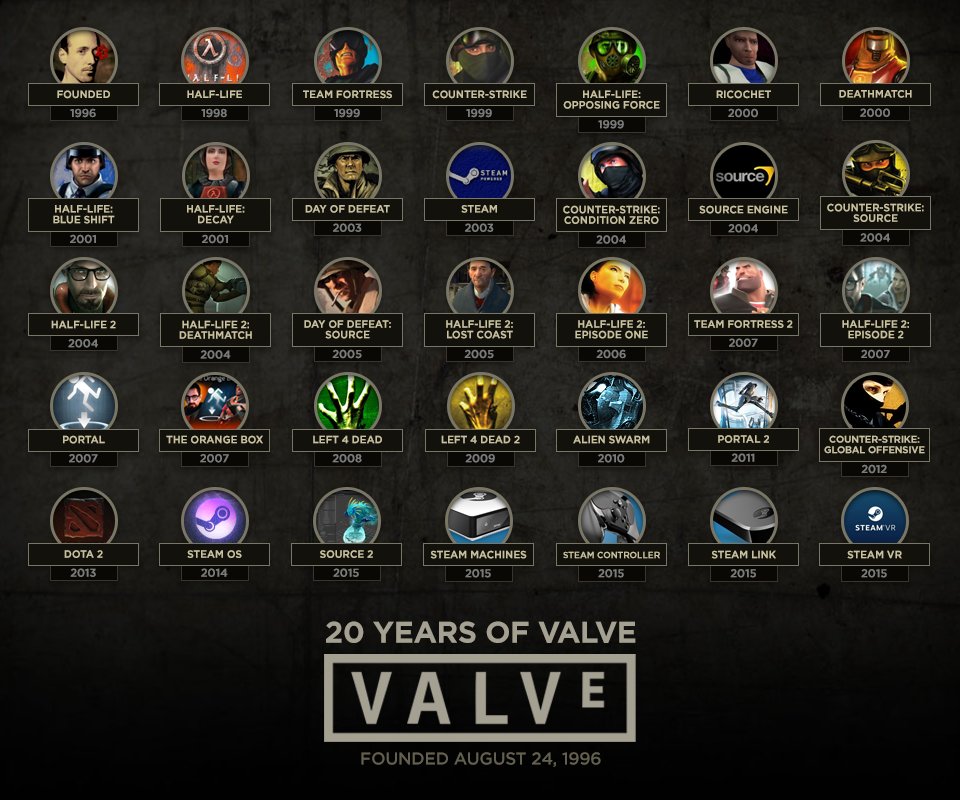 I remember there was a time when the thought of buying a game on Steam seemed crazy. Why wouldn't you want the actual game install disc? What if the servers went down or if you weren't online? Buying a game on Steam seemed crazy and I stuck to purchasing games in a box. The thing that finally got me to actually use Steam was the second Humble Bundle. I much preferred the DRM free downloads for the games but since I had those Steam keys lying around I decided to redeem them. It was really nice just downloading the games and playing them from Steam and I ended up buying the Binding of Issac on Steam, then another game then another and now nearly all my modern game purchases are digital sales, many through Steam.

Yesterday Valve turned 20. Valve pioneered the PC game digital landscape and also brought us an incredible assortment of games in that time such as Half-Life, Portal, Half-Life 2, Left for Dead, DoTA 2, Portal 2 and CounterStrike. Valve has been hard at work over the last year but it's releases are mostly support the Steam ecosystem such as SteamOS, Source 2, Steam Machines, the Steam Controller, Steam Link and the new HTC Vive VR. Valve has had a pretty regular drumbeat of releasing one game per year since 2007 but skipped 2014, 2015 and so far nothing has been announced for 2016. We may be seeing a new era of Valve in a company that no longer releases many games but I think we can all admit that Steam and it's associated lineup is pretty important to gaming.

But seriously, either 10 years after Episode Two or 20 years after the first game was released would be a great time to reintroduce it. I've often wondered if a new game in the series would just be a disappointment, but we've had a major time gap now and I think the time might be right if they plan on doing it. It's still something people know about but it won't carry much baggage from the previous entries.

Honestly... I am over Half-Life 3. Like, yeah, i'm not really interested in it anymore. If it came out i'd certainly play it but I am not longer emotionally on the hook for this game at all. I think I just need to let it go. It helps.

They have The Lab on SteamVR...

"Valve has had a pretty regular drumbeat of releasing one game per year since 2007 but skipped 2014, 2015 and so far nothing has been announced for 2016." They released The Lab this year.