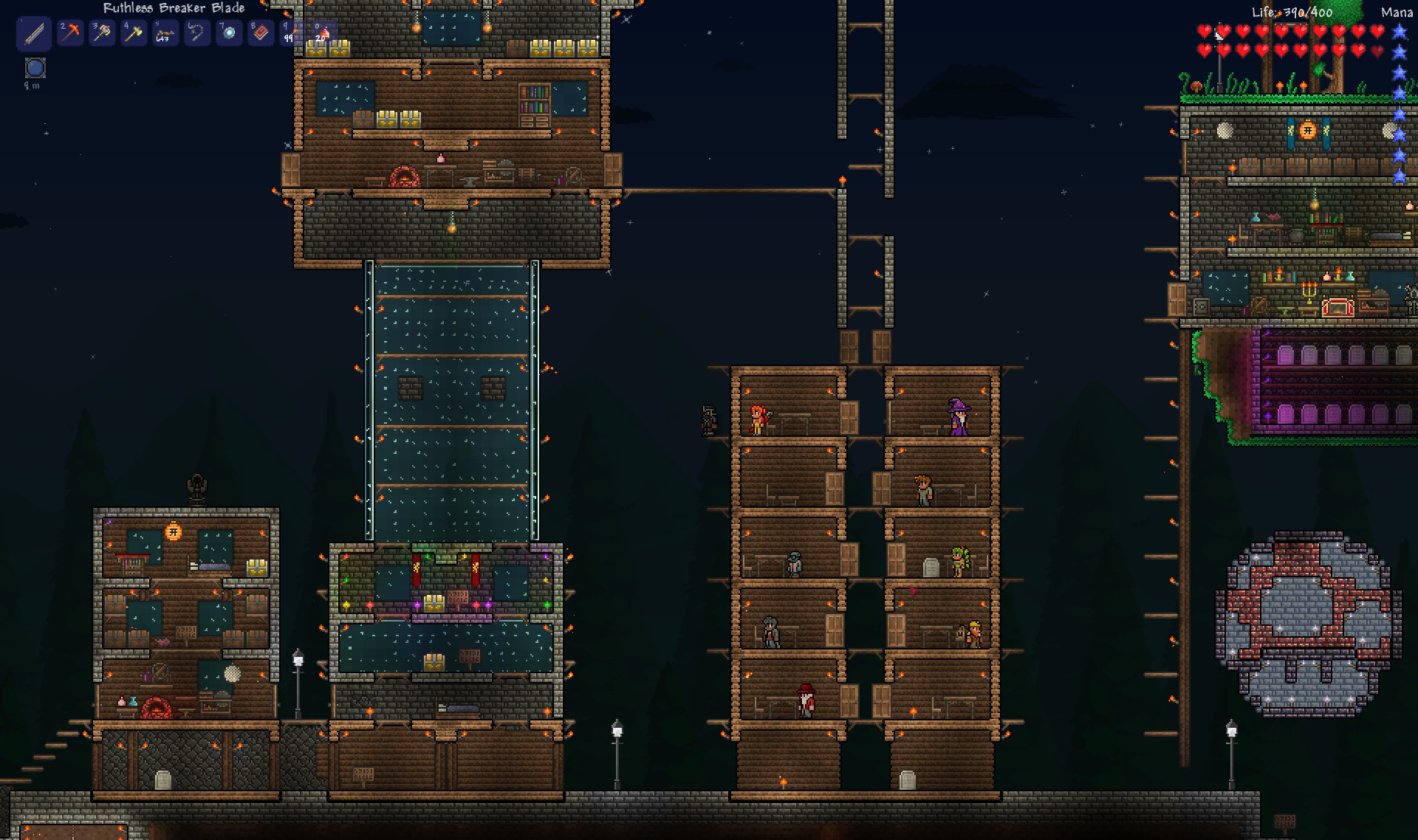 I turned off the Terraria server tonight. It was awesome to see what people did with the game. I was honestly surprised people built as much, mined as much and killed as many bosses as we did. The screenshot is of the final state of the game at night and as you can see, the village is fairly dense.

We mined down to the underworld, killed Skeletron, The Eye of Cthulhu, Eater of the World, survived countless Blood Moons, Goblin Invasions put the world in hard more and then defeated the hard more bosses.

Some of my favorite moments were on the first night spelunking underground with @chowda, exploring the underground Jungles with @panickedthumb and killing the wall of flesh 10+ times with everyone before we set the world to hard.

I really enjoyed the world and as such plan on having other game events we can play together if people are able. That said, I promised to share the world file after it was over and here it is.

The underground jungle was damn fun. Annoying at times, but tons of fun.

This server is honestly one of my favorite experiences in gaming. You guys are all awesome to play with. Terraria is so deceptively deep, and it was great discovering it all with you guys, building tons of awesome stuff, and taking out bosses.

Any privacy concerns with 4shared? I've never used it but need to create an account if I want to download that file. Just want to make sure they aren't going to steal my identity or burn my house down or anything nefarious.

Ah, didn't know you need an account to download that file. I'll share it with another service. I kind of just picked a random site. Do you have one you use?

Well, I did, but the FBI shut it down :) Haven't looked into it much since then. Megaupload was awesome.

But I don't mind creating an account, as long as it's safe, or there's always bugmenot.com :)

I have incorporated some key elements of our world into my own and finished my base. Video is uploading, but it's going to take some time.

And now, just in time for the Diablo 3 patch, I think I'm done with Terraria for a while.

Good call. Look forward to checking out the video.

It was a blast to jump in on this. I wish I had time to participate more, but the time I had was well spent. Thanx for getting me started and giving me quite the loot boost, everyone.

Yeah Greg, you can download both of our old game maps (this server map is linked above) if you want to see what we did.

Jon, I see the first one "cg_world1.wld" in the link, but not the second.

Ah, yeah I am not sure where but I posted about the second world and put a link to it in another post. Let me see, try this one:

Awesome! I'll have to go explore!

Wow and oops! I was exploring the first world, it's pretty cool. I fought some Corruption enemies that I hadn't before (I haven't really explored the Corruption in my 2nd world yet). Then, I went to the Underworld to do some exploring and what do you know...I killed a Voodoo Demon and it dropped it's doll in the lava. Even with the Spectre Armor and a total of 51 defense, it was an easy fight for me and my Terra Blade. It's pretty cool exploring the worlds created by you guys. I did throw each world into my Terraria backup folder, so no matter what I do, I can always revert. Thanks for giving me three new worlds to explore! I also am the last person to visit the first world (obviously), about 2 years after you guys. Hahaha.