Yes Virgina, Doom: The Board Game is Fantastic 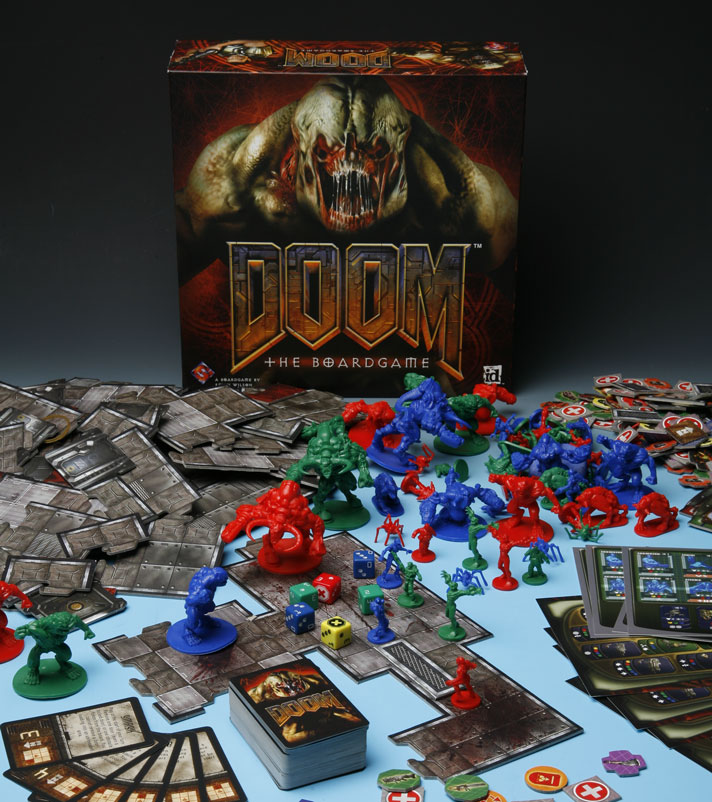 If you have been reading my posts over the last few days I have been posting a lot about Doom because of the release of Doom 3: BFG Edition. I decided to write a few of my thoughts down about the board game that brought the love I have for board games back, Doom: The Board Game.

Also check the site tomorrow as I will post an interview I gave with Kevin Wilson. Kevin Wilson is the designer of such amazing board games such as Doom: The Board Game, Android, Descent: Journies into the Dark, Arkham Horror and Civilization: The Board Game! Yep, that Kevin Wilson! Incredible.

I was going through a Doom craze about 5 years ago and in a off the cuff moment I decided to purchase a game I wasn't sure about. I mean, Doom as a board game? Honestly I wasn't into board games but at the time I wanted to try it out. After the game shipped and I opened it immediately I realized this was going to be better than I expected. The plastic game pieces are really great quality, the tokens looked great and the rule book and scenarios were compelling.

My wife even got into helping me baggy up the pieces and organize things to put back in the box. I think that helped me get her to play with me the first few times as she wasn't to keen to play the game at first. I really wanted to play the Marines so she took the duty of playing the invaders. After reading the rules and playing the first mission I was in love.

The game play was deep, interesting and the thing I never expected was the board game felt like the video game. The way the game was built allowed it to come alive on the board and over the next few months my wife and I would play it "cat and mouse" against each other. It was a really fun time.

That said, the game is hard as hell. Literally, it is very hard for the Marines. So if you are expecting an easy time or to always win, this isn't your game. I'll admit we got into more than a few arguments over some aspect of the rules(they later issued some clarification online about many of the problems) or difficulty.

Doom: The Board Game allowed me a window into how awesome board games can be. I even got into Magic: The Gathering around that time as well. Now I have many board games in my closet and look forward to getting awesome new ones. That said, Doom: The Board Game got me back into table top and for that it will always have that special place in my heart.

Check the site tomorrow for my interview with game designer Kevin Wilson!

This is intriguing to me. I love a good board game, but so many of them require more than two people, and while my wife and I love board games, not many of our friends do, at least past Monopoly and the old standbys. Same goes with MTG. I would spend half my income on cards if I had more people to play with.

What I really want is some people to play D&D with. I played that in middle school, and when my group grew out of it, I was stuck wanting more and almost two decades later I've never found it.

Also, dude, looking forward to that interview. I've never known anything that goes into designing a board game.

There are some really great modern board games that are really fun for different kinds of people. I should write about this next week, but we got a fun board game called Smallworld that is accessible to any kind of person. It's kind of like fantasy risk, but not as geeky and i've played it with lots of different people.

I haven't played pen and paper D&D before, I really should though as its pretty interesting. I have a D&D board game with simplified rules and that is fun because you can do a whole crawl in a few hours, but something deeper would be nice too.