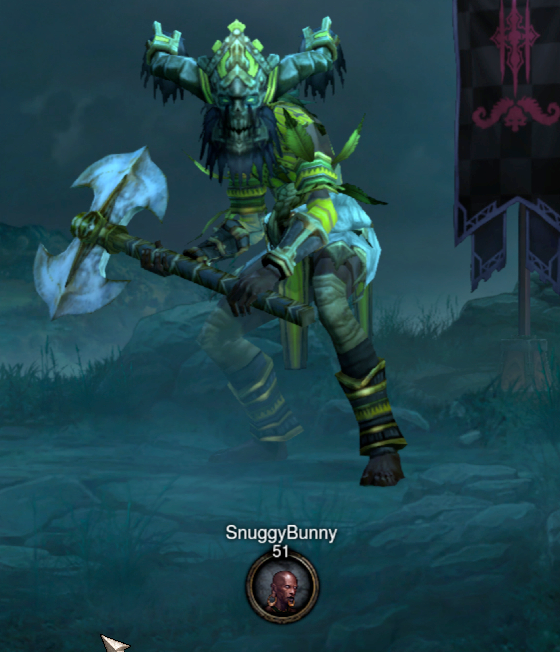 A few days ago I finally made it to Hell in Diablo 3 with "SnuggyBunny" my Witch Doctor. Beating Diablo in Nightmare wasn't too difficult. I sort of stopped going to the Auction House and only used the gear from game drops until I recently picked it back up. I think that made the game a bit harder than it would have been otherwise. After I started over in act one in Hell I decided to hit up the Auction House to see what kinds of things I could buy with all the gold I had. I had about 250k gold so I figured spending 50k on a weapon would get me something better than I had.

I had a two handed axe that hit for about 98. My total damage with modifiers and such was about 1200 damage. I found an two handed axe for a 50k buyout that hit for 1000. Its total strength and attribute modifiers took me from 1200 damage to over 10k. Its fun stomping the shit out of everything for sure but going from 1k -> 10k damage by dropping 50k gold seems a bit over powered. I wonder what I could get for 250k?

That said, it was fun to beat Diablo again and had fun doing it again. No secret Diablo 3 disappointed me a bit so its good to go back after taking a break and have a lot of fun with it. That said, coming back to grind every so often is fun and I look forward to playing the other classes as haven't really started with any of them yet save the Barbarian who is still in Normal.

After I beat Hell I got an email from Blizzard... More about that in my next post.