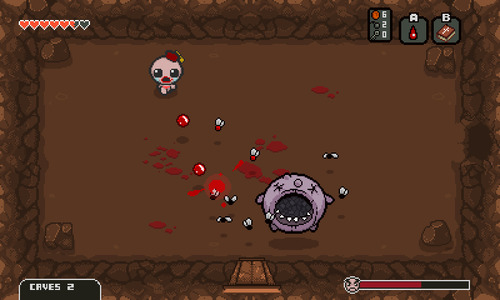 Edmund McMillen of the Super Meat Boy & Binding of Isaac fame dropped some news on The Binding of Isaac Rebirth. Recently he had a Formsping Q&A on his blog and you needed to be made aware of the details. Your welcome in advance.

"-Rebirth is a totally remade game based on the flash version of the binding of isaac + wrath of the lamb.

-The game is being produced and developed by Nicalis, the guys who did all the cave story remakes and the VVVVVV port.

-Nicalis is working on the port for Ps3/Vita and PC (steam) and is also currently talking to MS and Nintendo about releasing on their platforms. we are also looking into an iOS version if its not garbage.

-The remake will feature all the content featured in BOI+Wrath but will also feature another Wrath sized expansion over the top that will feature a new final chapter, ending, 2 new playable characters and tons more items, rooms, enemies, bosses and the like. the goal will be to make replaying the whole game not only worth it but also make i so it feels very fresh and new.

-The remake will feature content that was removed from the flash version of the game due to limitations (secret stuff!)

-The remake will feature LOCAL 2 player co-op… no online play because that will just extend the release by another forever.

-I will be lead designer on the project, making sure things are as perfect as we can make them and as true to the original as possible, i will also be designing all the new content and features.

-The game will be getting a full 16bit make over, im doing this because i think the art is tired and im sick of looking at it. i think a fresh coat of paint is needed and i think its kinda appropriate/funny to do a damake for the remake.

-We will try to do a loyalty pre-order discount to anyone who owns the game on pc."


The full post where he drops the details:
http://edmundm.com/post/36798306331/binding-of-isaac-console-remake-details

Edmund also ran a poll about the remake:
http://edmundm.com/post/37223982057/binding-of-isaac-retro-remake-the-results-are-in

Team Meat is working on a new game called Mew-Genics and dropped a bit of information on how diverse the in game cats are:

"So yeah, Mew-Genics will feature over 12,207,031,250,000,000,000,000 cats. its easy to assume you and your friends wont ever have the same cat. technically that number only applies to how the cat looks, if you include its personality variables that number multiplies by A LOT.. not to mention the ability variables, personal stats and a ton more secret stuff we will talk about later on."

This is in the running for my most anticipated new games besides Starcraft 2: Heart of the Swarm.

Oh hey, I didn't know he did both of those. I should have guessed based on the art though.

Right. He is pretty busy right now. Isaac remake, Mew-Genics, Meat Boy Mobile and something else... But I don't rightly remember right now.

Get out of my dreams and into my car! My only misgiving is the no online multiplayer. Anyone on the Watch Out For Fireballs steam group knows I have put a whopping 350 fucking hours into isaac. Now, maybe 50 of this is idle time but this remains my go to comfort game.

New Isaac is very, very good news for me.

Have you done a lets play with Isaac? 350 hours means you must be good at it and id like to see someone awesome play that game because its all real life tears when I play it.

Looking forward to this version.

I hate to brag but I'm actually awesome at it. The problem is my let's play software thing needs a program to export in direct x to work.

I really wanted to do a one-off let's play/beginners guide for it. It's been done to death but I've personally given out like 10 copies of that game.

What do you use for Let's Plays? Wanna send me a email?

This is awesome news. The flash version runs horribly for me on almost every machine I've tried it on. In fact, the Linux port from the Humble Bundle runs worse. Fullscreen's not an option, so maybe this rebirth will allow me to finally finish the game.

Yeah, it seems like Rebirth is written in something non Flash to help out there.