Pokémon Go May Be A Significantly Important Game

I'm sure you've all heard about Pokémon Go by now. It's the mobile game that has you going out into the world to find Pokémon.

It's pretty fun. At it's heart, it's mostly all about catching them all, less about the RPG elements of the main games of the series. If you like geocaching, this is right up your alley, it's just Pokémon you're finding instead of muddy containers. If you played Ingress you'll feel right at home. It's made by the same developers, Niantic, and all the points of interest in Pokémon Go are the same. They already had all this map data, so why recreate it right?

I managed to get up to level 6 without even leaving my apartment. This area is But alas, I ran out of Pokéballs. To get more, you either have to pay for coins to buy more, or go out to Pokéstops. As it turns out, I needed to run some errands today so I decided to add some stops to my trip.

Now, the title of my post was not about how fun the game is, it's about how important it is. And this is where the importance comes in.

I noticed the mall next to the store I was in had three Pokéstops and someone had used a lure to get rare Pokémon to come around. There was a little lounge area in the mall where you could reach two stops and the lure, and there were thirty people or so all gathered around chatting and getting items. Pokéstops reset every few minutes, so between resets people would walk around the mall, getting in steps to help hatch their Pokémon eggs (incubators require you to walk a certain distance to hatch eggs).

Even discounting this experience, I saw dozens of people walking around with their phones out, talking with people. A friend of mine has even made some new friends by running into groups of people playing.

So, this is important for two reasons:

First, ARGs like this have never caught on to this extent. There were a lot of Ingress players, but this is orders of magnitude higher. This seems to be the game where ARGs become an established genre.

Second, this finally fulfills the Pokémon Company's goal. For years, each new game has gotten more and more social, and more and more active. There was a step counter for one game set that let you level up your Pokémon by walking around (or attaching the step counter to your dog's collar). Finally, a Pokémon game is bringing together massive groups of people and getting people active.

I'd encourage anyone with a smartphone or tablet to check this out. Smartphones would be worlds better, because you really need a data connection for it, and unless your tablet has mobile data, the areas you can play are very limited.

And even if you haven't played Pokémon games in the past, don't let that stop you. This really requires no experience with previous games, and doesn't even play like previous games.

And join the Blue Team! :D

The social stimulation of Pokemon Go is one of the most interesting things about it. The gyms that I've come across, so far, have all been at restaurants, malls, and even the local YMCA, all places obviously designed for mingling with friends. As you say, Travis, they're now, all of a sudden, places for spontaneous nerd hangouts. It seems that competition, even though it's there, is largely downplayed, which seems like a good thing.

I haven't done any official mingling, yet. Most of my hunting is on my daily routes. One of the cooler features, is the window in the bottom right of the map screen, which shows what Pokemon are near you at the time. If you haven't discovered one of those, it will show up as a greyed out silhouette. I recognized one of those silhouettes as a Bulbasaur. Of course, this was at 11pm, and all I was intending to do in the game at that point was go through my backpack and transfer unwanted multiples to the Professor. I really wanted that Bulbasaur. I got up, got in my car, and drove around the neighborhood until I found him. It took a few attempts to finally catch him, but I'm really glad I did, otherwise I probably wouldn't have slept that night.

I completely agree. I can't believe how many people I'm seeing walking around, hunting Pokemon. I've never played a Pokemon game before, but last week when I heard the term "augmented reality," I had to check it out (I downloaded it on Wednesday, when it was only available in Australia and New Zealand, so I take pride in everyone following my lead)

It took a couple days to figure out exactly what to do, but I'm learning as I go. It's been a lot of fun to hang out with friends and all collect together.

And it looks like the Westboro Baptist Church is getting trolled through PG, so that's awesome :)

I see kids in my area out collecting Pokemon and some adults too. One kid was really into it and that was really nice to see. It hasn't caught me yet, but from your description I really want to head out and try it when I get some time.

Here's the thing-- I estimate I've seen about 130-150 people playing it, and that's not an exaggeration. But I've only seen one or two kids. That kinda surprised me.

I know (assume) a lot of kids these days have smartphones, but I don't know how many parents would allow traipsing about the countryside, bumping into strangers who could possibly suggest going "on an adventure together." Of course, when I think kids, I'm thinking pre-teen.

My son and I are big fans of Pokemon, but since we don't have smartphones, we haven't jumped into the latest Pokemon Go craze. However, I did find an interesting article about what our Presidential candidates think about it. The Hillary Clinton camp is actually going to host an event. 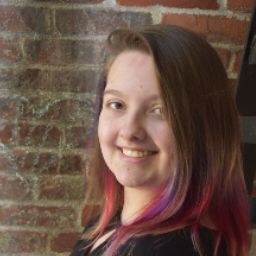 Yeah, I personally find it fascinating how the internet is reacting to Pokemon Go. If you haven't already heard, the three teams are Team Instinct (yellow), Team Valor (red), and Team Mystic (blue). Since the game is divided into teams, people online are taking it to some serious measures.

Someone wrote "Team Mystic" to deface a sign. You can see it (and the awesome people who cleaned it up) here: http://imgur.com/gallery/pXrYz

It's also interesting to see that Nintendo's stocks went up, what, $7.5 billion?

Overall I'm very glad that Pokemon go has inspired so many to get out of the house and meet people and have fun.

And yes, you should TOTALLY join Team Mystic!

I wish I could play. I'd definitely be Team Mystic! I often choose the Water type starters, just because I love that they're usually blue. Haha

I swear if Trump dressed up in an all blue suit you'd love him :D

Or alternatively you'd switch to a different favorite color!