Sega does what Nintendon't, 2016 edition: a mini-Genesis with expansion capability 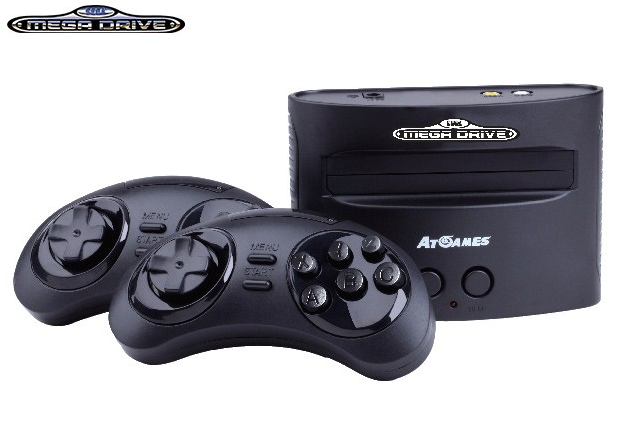 The tiny console wars are upon us! In October, a mini-Genesis with 80 built-in games will be arriving.

This is coming in two versions, the one pictured, and a handheld version: https://i.imgur.com/ckF2hWc.png

Both versions retail for about $65 USD and are currently only available from a UK retailer.

Both have 80 built-in games, but they have expansion capabilities. The mini-console has a slot to play original Genesis carts, and the handheld has an SD card slot (so are they tacitly approving of downloading roms?).

So lets talk about those games! 80 of them! That's 50 more than the mini NES! Well, yes it is. But you'll only care about 40 of them probably. The remaining 40 are things like Chess, Solitaire, Sudoku, things like that. But still, 40 Genesis classics and 40 puzzle/strategy games isn't bad.

Downside-- no HDMI. That's not a dealbreaker, but the mini NES could (one hopes) scale well to 1080p. This one will be stuck at 480 over composite cables. I play retro games over composite all the time and it's not bad, but it's obvious these were made for the old TVs we used to use.

The full game list and more details can be found on The Daily Dot: http://www.dailydot.com/parsec/sega-mini-mega-drive-genesis/
And if you want to order it now, Funstock Retro has it ready for you: http://www.funstockretro.co.uk/sega-sonic-25th-anniversary-range

Tricky! Composite, low-fi, but expandable, or high-def retro? What do you play on that still has composite connections? Are you rocking a tube TV?! Double retro! Seriously, I was considering finding a flat-screen tube to play SNES and PS1 games on. Those were the days...

Looks very similar to what I bought years ago. I honestly barely used it. Maybe I should find it and hook it up again. I never experienced the Mega Drive part of Sega, only the Genesis. I'd also like to note that TONS of Sega (Genesis and Mega Drive) games are available on Steam. I saw one package for over $100.

I love that it can play old Genesis carts, but there aren't any games preloaded that I'm really interested in. A play through of Altered Beast would probably be fun, and the Mortal Kombat games are cool, but this lineup has nothing that could stand up to the NES game lineup.

I have two HDTVs, one of them is a 720p from a few years back, the other is a 1080p 3D super-awesome smart TV thing. Both of them have composite connectors! You may not realize that you have them, sometimes the component connectors do double duty.

It feels like putting easy cheese on a meal at a swanky restaurant, but it still works pretty well to play the NES on a 1080p TV with composite.

Greg MegaDrive IS Genesis. They just renamed it for America for some reason. So the same hardware in Europe was called the MegaDrive. You might be thinking of the Master System, which came before the Megadrive/Genesis.

That's good to know about the composite and component connectors.

Master System, Megadrive, Genesis, wow that's a lot. All I know is I only had experience with the Genesis and Game Gear. My cousin and friends owned a Genesis, while I owned a Game Gear.

It's only two though! The master system came out around the time of the NES. It's in that generation. Then the MegaDrive came out in the next generation.

I think there was a trademark issue so in North America they had to call it Genesis instead.

> Looks very similar to what I bought years ago. I honestly barely used it.

Apparently it's one and the same thing and it's received some unfortunate reviews.