The Verge interview with Gabe Newell 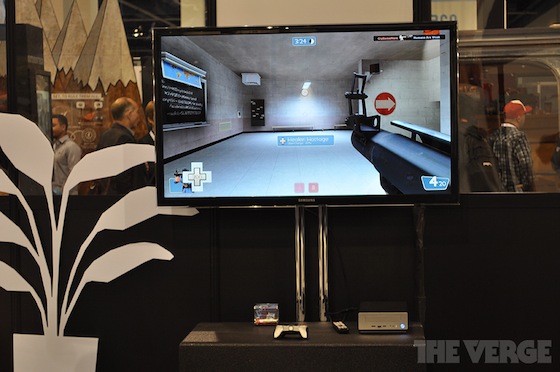 Gabe did an interview with The Verge recently about the Steam console, Steambox, Piston, Bigfoot, whatever you want to call it. Read it here:

It's an interesting read, and the fact that they're building this platform, this paradigm, that anyone can pull from makes me very happy. Hopefully the fact that anyone can make a Steam "console" doesn't muddy the waters. It's one thing that has held Linux back, the confusing variety, but if Valve can pull this off it may change the way we game in some significant ways.

I think as long as the variety exists in the hardware and not the software/UI it shouldn't be an issue. It would basically be following the Android model, which works quite well. In my opinion market competition can only be good in cases like this.

This is a great interview, thanks for posting. I have been reading a lot of "ho hum" and opinions that seem to think this is a mistake Valve is making. I will put some of my chips firmly in the "this will be a game changer" bucket. I know, I should be cynical but I am not, this is what I want, so like Tungsten I am excited.

I'm not going to lie. I hate corporations and consider them my enemy. Google won't charm me and I'll never have both a Coke AND a smile. But I'll say this... Valve totally won me over. I want to have Valve over for dinner and I'd totally watch Valve's dog while their away. I can't envision Valve making a move that is not a sound one. I'm stoked for this and if it were a single company trying to make a Steam box, I'd think, "This won't work" but if you fill the market with options, people will take notice and it will become successful. I'm very excited to see how this all pans out.

"I want to have Valve over for dinner and I'd totally watch Valve's dog while their away."

This was almost poetic. I love it. I'm right there with you, they won me over. I know many felt about Steam in the beginning the way a lot of people feel about Origin now, but they've come around in a major way.

I didn't do much with Steam earlier, not because I thought Valve was evil, but because buying the physical pressed game disc was often cheaper. Now thats really not the case and I jumped pretty far into Valve's ecosystem since.

I like the interview because it wasn't "Hey, look how great our new technology is! You are going to love it!" (I'm looking at you WiiU)

Instead it was: "We are going to give you what you want. If it sucks, we're not making it"

They are a pretty cool company that way. Thinking of customers above anything else is a great way to approach stuff. One could say much about Valve but they really give a shit about doing the right thing by people.

I got a lot of great feedback about Valve in my interview with Zach Barth... now if I can just get around to transcribing it.

You interviewed Zach Barth? You gotta transcribe! That sounds interesting.

Is anyone else running the Steam beta in Linux yet? Steam is the only reason I still have Windows on my laptop and it's a touch disheartening to see some games performing better in Windows 8 than they do in Linux. However, Valve has helped advance the driver support for video cards by working directly with the vendors, so I am confident the kinks will get worked out by the time they release the actual Steambox.

To Microsoft's credit, games perform better for me in Windows 8 than in Windows 7.

But you're right, games don't run as smoothly yet. I haven't tried TF2, and there aren't any other Valve games available yet, but from what they say Left 4 Dead 2 runs better in Linux than in Windows. There are a few things at play here. You have the Linux desktop model which is a bit flawed, drivers that aren't optimal, and developers who are less invested in getting the Linux version up to snuff. It's going to be a bit of a process but having been in the beta for a while I can tell things are getting better, slowly.

But bean, I have one suggestion for you, or rather, one set of suggestions. First, what video card and desktop environment are you using in Linux? There are a few optimizations that can make worlds of difference.

E17 on ArchLinux, Intel HD 3000 (the bare minimum for the beta spec), Core i3, 4GB of RAM I know! It's hardly worth calling it a gaming rig. My desktop, which had MUCH better specs, died and I needed a replacement computer...not just for gaming.

L4D2 isn't yet available in the Linux beta. Sad, because that one runs real well on this hardware in Windows, which is one of the reasons I signed up for the beta. I had an empirical baseline for performance.

I haven't tried TF2 in a couple of weeks and I was running XFCE before switching to the lighter Enlightenment 17. In Windows, framerate is low, but playable. In Linux, not close.

OK well, that negates my advice. Unless there's a way in E17 to turn off desktop compositing when full screen apps are in use. I can't remember if it uses compiz or something else for its compositing. And my other suggestion was a setting in nvidia-settings, so that's worthless as well. I tried! :)

I am running Steam on Linux and opened Tf2 and it seemed fine to me. I have a reasonably powerful Desktop with an Nvidia card. So far, I think the biggest detractor is the lack of available games but over the next bit that should change.

Since I do CG development on Linux I had to run Steam using Wine to chat with people while I was developing. So for my primary use on Linux, which is to talk to other people, it works great :D

I am running it on Linux just for chatting as well. I haven't even bothered with any games because I know it's not going to be ready for some time. I feel like it would be a waste of time to adopt it as a serious platform just yet. For me personally anyhow.

E17 has an option to disable compositing on fullscreen windows. Already taken care of. :) I know that part of it is also my very low-end integrated graphics card. When L4D2 becomes available, I'll give that a shot. Until then, I'm hoping more of the Humble Bundle titles get added. Bastion and Binding of Isaac, to name a couple.

I have yet to actually try the voice chat in Steam but I'm glad to hear that works well!