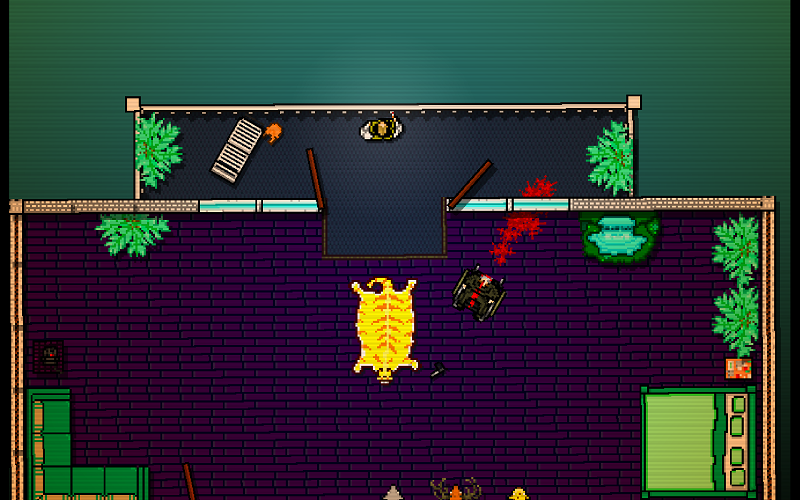 Hotline Miami was the main reason I picked up the Humble Bundle 8. I heard good things about it, but for whatever reason didn't pick it up till it came with the recent Humble Bundle. I think I can describe Hotline Miami best as "The Drive move video game." I don't mean that in a negative way, Hotline Miami is excellent as is the Ryan Gosling film.

The story is really interesting and like some indie games, doesn't lay itself out in a way that is easily accessible. Since the games story isn't entirely straight forward you can interpret it in a number of ways. The Hotline Miami story is a kind of 80's movie where the main character appears to be schizophrenic. At least, that's how I looked at the masks you unlock and the story breaks where the Horse , Rooster and Owl Mask characters talk to you. They are just the main character talking to himself from a different part of his personality.

If you take this way of looking at the game to its end many things happen in strange ways that hinge on the character being insane. I am not entirely sure viewing the main character as schizophrenic works, its just made to me. That all said, the game is amazingly fun along side the unique story.

Hotline Miami is a 2D top-down GTA style kill-em-up where the goal is to kill everyone on a floor. The later levels have many floors and the games floor design is really great in that the challenge keeps ratcheting up as you progress. One other element of Hotline Miami is that __you will die a lot__. I can't stress that enough, you will die a ridiculous amount of times in this game and that's all part of the fun.

You need to evolve some strategy to win the game OR you will hit a brick wall with it. A few things I learned to stay alive:


The game soundtrack is very well done. If you are interested in listening to the games unique score, check it out here:

Over the last few days I have sunk a few hours into it and just beat it a few minutes ago. The game took me about 6 hours to beat start to finish. This is one of those games where beating it feels like an accomplishment because of its difficulty and unique flavor.

If you have it, I seriously recommend you play Hotline Miami. I do want to warn you though, the game is odd and filled with horrific violence and other disturbia. Which, you know, is part of the fun.

I really enjoyed Hotline Miami as well. For a game that is known for its violence, it requires a great amount of strategy and has quite a moving story.

Awesome, thanks for sharing that. I think a sequel would be great. And your right, it requires a ton of strategy, much more than many of the shooters ive played.

Watch the Errant Signal video on it for a new angle of appreciation. There's more to this game than meets the eye.

Nintendo Hard. Everything is fair and consistent: you just have to be a beast to pull it off. Luckily it has a catchy sound track and no load time between respawns. You still actually enjoy a level after you've died on it 120 times.

Interesting Errant Signal video and he brings up some interesting points. To save everyone a Google:

Uhm, or it is providing a off key narrative and metaphor that isn't accessible for the style of the game. This guy kind of lost me when he said that and im not sure folks involved with the game agree here.

"So the aesthetic came first and the story came second, is that common?

I don’t know if it’s common, the story usually comes first and then the artist will have some interpretation on that and they’ll come to an agreement on it with design. What happened here is the type of game you’re playing — a fast-paced, trial-and-error, almost Super-Meat-Boy-type of action — was really what the aesthetic was built on. Story was kind of secondary. The original story was focused on the drug trade and cocaine cowboys. The name was changed because as the game evolved the team came up with a new story based on the idea of these answering machines; these hotlines people were calling and leaving these messages and the violence that came out of that."

So yeah, it wasn't a first class consideration but I don't the game was trying to say it is meaningless or irrelevant, I think it might be something else.

I don't always agree with dead author but in the case of video games, an explicitly commercial medium, I think it's an important step to finding deeper meaning in games.

That said, I don't 100% agree with Campster on this one. I think the game being about violence angle is pretty valid.

I think the game is about violence for sure. Yay for that too, it was a fun aspect of the game. Shocking to be sure, but very fun.

I am not trying to limit what people want to do or the places they want to go with art. The guy that made that video is capable and does make videos and I am not going to stop that, well clearly. I just don't agree with his interpretations up to the last 25% of the video. Because, well, it just didn't make sense with how I played the game and how it sort of seemed to me.

I agree with the notion that the work has an effect and that can take a life of its own outside the author or original intent. You know, thats maybe not what Death of the Author means but thats the best way I can describe it because if it truely means we must divorce ourselves from the author or original intent then that concept can jump off a cliff. At least for me, because I like behind the scenes shit and understanding what people wanted to do to see how I looked at it and contrast. I think many people outside my personality style do the same thing too.

That said, I don't mind people taking a work and reading a ton of meaning in it intended or otherwise based on what they bring to it. I think thats a different thing that people saying "THIS IS WHAT THE GAME IS" when the author clearly didn't mean that. Because we do bring things to the table when we experience art and thats fine. I think with some work and its popularity it can have an effect where it takes on a whole life of its own. Star Wars is such an example as its so ingrained in all of us it takes on a life that George Lucas may have never intended and his intent may not be relevant anymore.

That said, really in this instance I just don't agree with this guy and his opinion on what the game is trying to do. Which, I think is fine.

I think the best thing you can take away from Dead Author is that if we find meaning in a work, that's enriching and helps bring us closer to the work and that's valuable on it's own. What the author intended shouldn't take away from that.

I'm pretty sure he says he'd like to "posit" a different interpretation, which suggests to me "suggest" rather than decree, but, again, I don't totally agree with him either. I am, however, fine with people saying games are about whatever they want to say they're about. Might be baseless and not backed up with evidence (and I'd argue that Campster supports his argument well) but I don't think it's wrong to do so.

Yeah totally. I took away things from Super Mario Brothers I am sure were not intended, but it was sort of how I looked at the game from my childhood perspective of mad wonderment. I am not sure I can look at games that way again and am not sure I want to save it things were fresh in ways they are not.

On that note, which isn't related to our original discussion at all... It kind of seems more art is being created now and of such high quality that our collective tastes have risen such that we chide awesome work in ways we wouldn't have otherwise. I kind of think something like Raiders of the Lost Ark would be slammed in ways it isn't now because we had lower expectations then. If you adjust the movie for a modern spin, then again perhaps a modern take would be a less interesting movie.

For whatever that is all worth.

That's undeniably true. The older I get, the more interested I get in inner spaces. My reaction to things is important and true and everything else I take with a grain of salt. Not quite solipsistic but closer.

True. But it may be more than possible for rocks to exist. And cats

But it might just be me. Rather, my mind :D

If you've seen any of the coverage of the sequal, it looks interesting, and fairly pertinent to the discussion. It certainly lends itself to the "This game is a criticism of violence" side of the story, but it seems to have expanded a bit:

That RPS write up is great. I really like how they are thinking about the follow up and look forward to checking it out.

"The fans" stuff looks cool. And even if the author was right and this is more like Hotline Miami 1.5, bring it on.