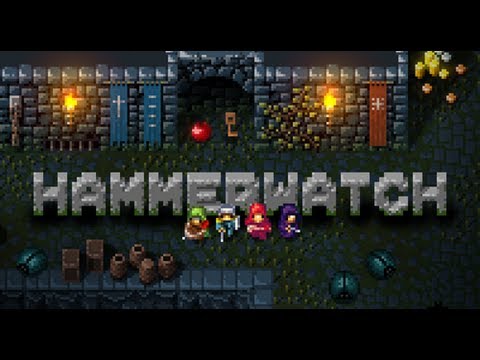 Hammerwatch is an upcoming Gauntlet styled hack-n-slash featuring 4 player co-op. Travis and I featured this game on the site a few months ago with an interview and early gameplay review. I am happy to let you know that Hammerwatch is available to pre-order from the Humble Store for $8. When the game is ready to ship the pre-order gets you access to the game, game score + Steam Key.

Seriously, this a crazy deal and its not even on sale.

No secret I am very excited for this game to launch and as such shipped over a few questions to the Hammerwatch developers about the pre-order and final release. I want to thank them for taking the time to talk with me and I wish them well shipping.

jdodson: I just tried beta 1.0.6 that has a new Tower Defense mode as well as a fleshed out Warlock class. Are there any other changes coming to the game before the games final launch?

Myran: We don’t plan on releasing a new beta version, no. Releasing a beta takes a bit of time from us and although it’s great to be able to get the bug reports from it we think we have a stable enough version now to just do the rest of the testing ourselves.

jdodson: Awesome to see the ability to pre-order the Hammerwatch beta on the Humble Store. Can you give us any hints when the full game may ship by?

Myran: We should be able to release it in a few weeks.

jdodson: Are the any plans to support the game after launch with content updates or DLC?

Myran: It depends on how well the game sells, really. If we can then yes, we would love to do stuff like content patches and improving the editor, but it’s not something we can really promise to do since we don’t know if we will be able to afford doing it. I doubt we will do any kind of paid DLC though, if we do content updates they would most likely be free.

jdodson: As you are entering the final stretch of development what are you focusing on in regard to the game itself?

Myran: What’s left is mostly polishing some features and balancing the difficulty. There are also some stuff that’s not directly the game itself, like making installers, a trailer and logos for stores. And then there is of course always bug testing and fixing.

Pre-order the game from the Hammerwatch site:

Our interview with the developers back in January:

Our review of an early beta of the game + developer Q&A session. It includes a video of Travis and I playing Survival together:

I'm looking forward to the release. The early beta was tons of fun, even in its unpolished state.

I tried the 1.0.6 demo available and that ships with the Warlock and an extra multiplayer mode, defense.

All worked very well and the Warlock might be my new favorite class now. He has a poison dagger main attack and a sweet lightning magic attack that fries people. Very neat addition to the game.