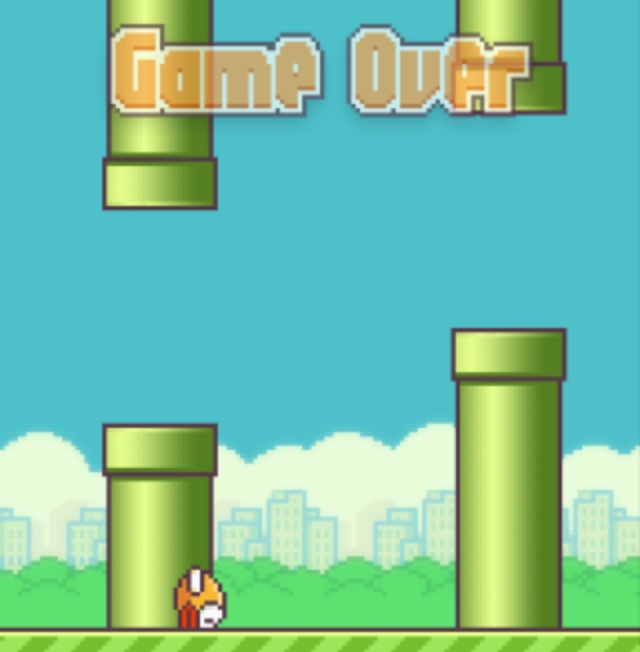 In Flappy Bird the tagline is simple with "flap your wings to fly." That said, the game is anything but and for me, I might rank it as one of the hardest games i've played and it's on my iPhone. The game mechanics are simple, tap the screen to keep the bird in the air and avoid hitting the super Mario pipes. Each pipe you fly past nets you a coin. Rinse, repeat. The game is deceptively simple and hard as %@##.

That said, I seriously recommend you guys download the latest gaming craze on your smartphone and give Flappy Bird a try. Currently my high score is 14, but my Mom seems to have gotten a 41 according to iOS's Game Center. Apparently my Mom is a Flappy Bird master.

Flappy Bird is available now on iOS and Android for the price of free.

My high score was 3. I don't understand why people like it. It isn't that it's hard, it's that it's bad. Even beyond the stylistic rip-off.

But just to add-- you have less than a day to download it. There's been a ton of outrage over it and the developer has announced that he's taking it offline tomorrow. https://twitter.com/dongatory/status/432227971173068800

If flappy birds style is a rip off then other games are worse. Way worse.

In fact, I think the "flap" over this game seems lame to me. He made a game with pixel art that sort of riffs on Mario somewhat. It's a hard game and I love the simplicity of it. He is getting in a shitstorm because of the "rip-offiness" but that's a load of bunk I think.

Now he is pulling the game because its a wild success and his life is suffering because of how horrible the video game community can be. Well, yay I guess we win... Or not. I guess when something blows up everyone wants a piece of the action, from media to players to douche-nozzles. I don't think you can make a hit and stay hidden behind the curtain OR maybe you just need to get off Twitter.

From what I read it seems like there are accusations that he used bots to inflate his count, votes, etc. to get more people to download it and rake in more ad money. And every question that he's responded to about it has been half-answers to non-answers. That's what the outrage is all about, at least I think. I mean yeah, people have complained about the assets looking like Super Mario World for a while but when the botting allegations came up is when he decided to pull it.

You're certainly right that other games are way worse, though. But "sort of riffs Mario somewhat" downplays it I think. It's that bird-fish-thing from Mario dodging the pipes from Mario. I think it's different enough to guard him from legal issues from Nintendo, but it's still quite obvious.

Accusations aren't proof and one can pay homage to things and not steal. I think him exiting with this game is sad and I wish him well.

I don't care that it has Mario style graphics, I just think it's a terrible game lol. I saw people posting about it on FB, so I downloaded it to see what the hype was, saw that it sucked, gave it one star and then uninstalled it and moved on. It sucks that twitter can be such a hate-filled place at times, but if the creator inflated the game's rating, I can see why people would be upset (if it's true)

Sure, I never said it was proof, but he's taking his game and leaving because journalists are asking him questions, which is something they absolutely should be doing. It was just idle talk until he started dodging questions about it, and then it blew up, of course.

If he is innocent, then yeah I feel bad for him (and he needs a coach to tell him how to answer questions) but if he actually did it then it's just cowardly, and the only sad thing is that he's raking in 50k a day from the ad money. Pulling the game just makes him look more guilty though-- that's not a good move.

I don't think this is just homage, but I don't think it's stealing either. 3D Dot Game Heroes was an homage to the top-down Zelda games. This isn't stealing, there are no assets taken from the old games, but it's blatant. There's no original design with the exception of the buildings in the background, it's similar enough that he just took the visual style and barely tweaked it.

And Adym, yeah, that's my problem with it. My progression was about the same as yours. It was on my phone for 15 minuets before I removed it and 1-starred it.

TO HIS CREDIT though, so I'm not just a negative Nellie... The game came out 9 months ago and nobody cared. Nobody cared probably because it's not that great. In fact I wouldn't be surprised if he made it as almost like a practice game to move on to bigger and better things. Using derivative artwork and mechanics from a 10-year-old flash game, that's a logical hypothesis.

But PewDiePie made a video about it and it became a thing. I haven't watched the video, but when someone with that kind of viewership talks about something, people are going to download it, and then it's going to blow up.

So the guy wasn't expecting this kind of publicity or pressure. Perhaps he saw a taste of fame and decided to fudge his counts and reviews to get more downloads. Perhaps he didn't. Regardless, this isn't what he signed on for and it's not like he has experience dealing with things. Maybe his question dodging was just because he was nervous and didn't want to say anything that could come back and bite him later.

Still, he isn't handling it well. I don't know how I would handle getting death threats but I mean, for $50k a day in ad money I think I'd stick it out. If he wants to work again in the game industry he should be talking to people. But maybe at this point he doesn't want to. He's getting what Phil Fish got and he isn't as used to it as Phil was. Phil had some communications issues himself.

Anyway, I HOPE he didn't do what he's accused of. I hope it doesn't sour him on developing more stuff. There's no harm in people trying, regardless of what they release, until someone makes a bad game a phenomenon.

What I'm more worried about, really, is games like Candy Crush Saga making it acceptable to spam your friends constantly or pay microtransactions just to be able to play more than a few times a day. At least Flappy Bird is free-to-play and doesn't encourage spamming, even if the ads are a little intrusive.

Right, Flappy Bird is free and it just makes money through ads. If he makes a few bucks a day, good for him

He is also ESL so if he appears coy or stand offish there might be a translation problem in the mix somewhere.

So kinda back to the original topic, my friend just sent me this: http://i.imgur.com/2C6hDgC.jpg

Not bad. In Game Center it seems lots if people have 9,999. Maybe there is some secret to the game that makes it easier.

I would say the 9,999 people are hacking it. It seems it takes less than a day for mobile leaderboards to fill up with maxed out scores.

Ha, awesome. The pipes always won when I played Flappy Bird. It's nice to be on the winning team.

Yeah, Flappy Bird is no more. Well, at least for new people to come in and play it.

Don't worry! There's plenty out there that will frustrate you! http://www.buzzfeed.com/josephbernstein/ranking-the-flappy-bird-clones

So Andrew (my friend that sent me his high score of 73, posted earlier) just got to 97. I don't even understand how that's possible.

Practice makes Flappy Bird easier. That said, unsure i'd want to sink that much time into it :D It's fun, but it's not something I want to master.

Your opinion is more valuable to me since you never...