Starship Rubicon Will Be Our First Published Game 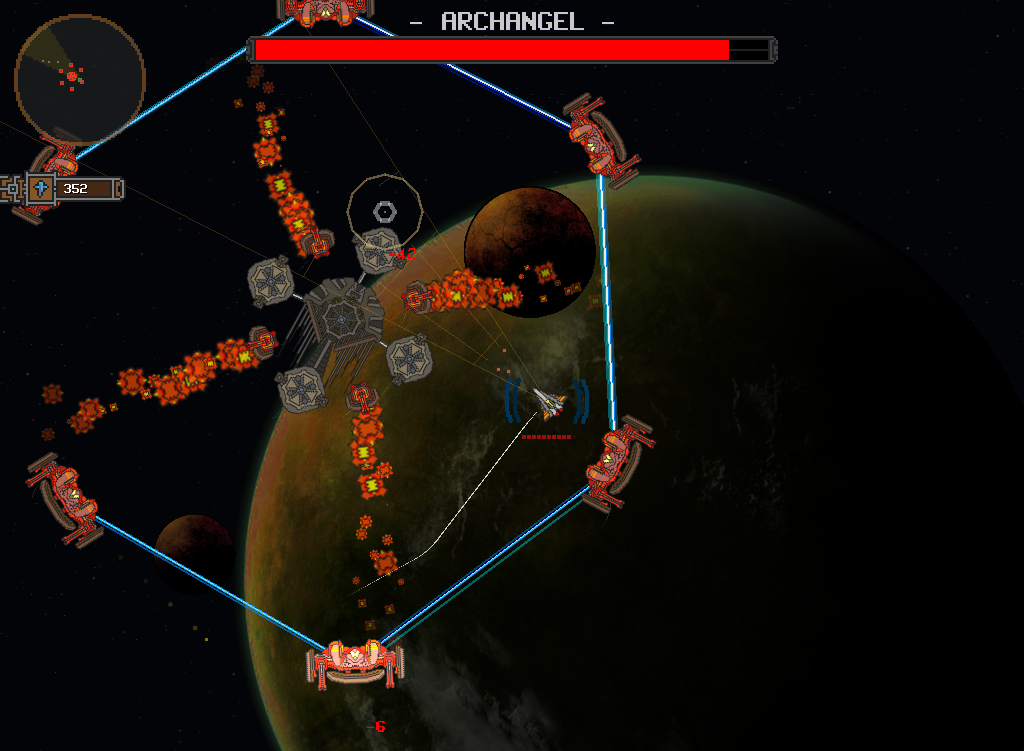 A few months ago I posted that Cheerful Ghost was publishing it’s first game and today I am happy to introduce you to Starship Rubicon!

Starship Rubicon is a space shoot-em up that modernizes the physics and mechanics of Asteroids combined with the ship modification and roguelike elements of FTL.

In Starship Rubicon, Earth has been casually destroyed by a mysterious race of space-faring invertebrates. You are a fighter pilot whose cryopod has been collected by a possibly-insane AI, who has placed you in the unenviable position of being humanity’s savior. Shanghaied and alone, you must gather the remaining human survivors and traverse the surprising biodiversity of deep space to find a new home.

Here are a few in game screenshots to show off some of the gameplay:

Starship Rubicon is developed by Wick, a local Portland indie game developer. We have been in contact throughout this part of the game’s development cycle and I thought it would be interesting to ask him some questions about the game.

jdodson: Where did the inspiration for Starship Rubicon come from?

Wick: The core mechanics of shooting and moving date back to Asteroids. I looked very closely at FTL, Crypt of the Necrodancer, and Spelunky after deciding that the most efficient way for me to create replayable content was to go faux-rougelike. The AI’s sentence structure is ripped straight from Zero Wing. The ship modification system is probably closest to Megaman Battle Network, though I played probably about a dozen other games with vehicle modification (e.g. Mechwarrior, Gratuitous Space Battles, EV Nova) for comparison. There’s only so many mission types you can do with just moving and shooting, and Space Pirates and Zombies does pretty much all of them -- I tried to nab the most interesting ones.

I copied so much of the excellent weapon, ability, and enemy designs in Bastion that I should probably send Supergiant Games some royalties. Luftrausers showed me the ultimate form of juicy 2D flight controls. I pretty much copied the unlocking-content system from Lego Star Wars. I played around with overworld movement a la Nethack / JRPG overworlds and the terrain modification of battles from Age of Wonders, but the design ended up being too uncontrollable and I was forced to scrap it in favor of FTL node-movement.

jdodson: Why did you decide to work with us on releasing Starship Rubicon?

Wick: After the 3-month Kickstarter development completed, I put the original Rubicon up for free and released the source code as per my campaign promises. However, turns out that putting up your game on a backwater personal tumblr (wickworks.tumblr.com) and then not doing anything to promote it means that literally (figuratively) nobody is going to see it. I’m pretty sure the only people to play Rubicon 1.0 were the original Kickstarter backers. I had a bunch of cool ideas on how to refine the game, but since the audience wasn’t there I had little motivation to implement them.

When Jon approached me about distributing it via Cheerful Ghost, it seemed like the perfect opportunity. I’d met Jon several times before and been left with a strikingly good impression- he seemed happy to get to know me and obviously cared about creating a good online space for games. Promotion is decidedly not my strong suit and selling the game meant that I would be able to afford to add tons of content to the existing engine. The terms Cheerful Ghost is offering is quite developer-friendly, which is delicious icing on the cake.

jdodson: To date, what has been the most challenging part of working on the game?

Wick: Programming challenges can take a lot of time, but they usually all have solutions and it can be fun puzzling them out. Ditto for graphics and sound, plus it’s satisfying to finally see them as animated finished products.

I think that, hands-down, I’m gonna go with design. It’s nebulous and scary. You have this immense freedom to put anything in the world on the screen. Tell any sort of story. You could say anything. Do you even have something worth saying? What is the experience you’re attempting to create? Is this the best possible way to create that experience?

There are constraints, of course, and I try to narrow down my options by being conscious of them. That makes it more mechanical, more solvable. But there’s always this spectre that there’s a better way to structure it, or an easy flourish that would bring the game to life. I feel like it becomes a reflection on yourself, that if you had a more interesting perspective or were a more witty person, then the game would show it.

jdodson: Lots of people want to get into Indie game development. Do you have any advice for people that want to start making games?

Wick: Start small. Wholeheartedly begin ten million different projects and finish none of them. It doesn’t matter that you never finished that 100+ hour RPG with a revolutionary plot, because you ended up learning A* pathfinding while putting together the starting town. Having your projects be in a whole bunch of different genres is useful because it’ll throw a wider array of challenges at you.

After you have at least one or two chops, do a game jam. They force you to finally scale down and design something doable given your skills. Plus it feels really nice to finally get something finished!

jdodson: What are you working on with Starship Rubicon right now?

Wick: I just spent about half the day revamping the first boss battle, which was too easy and boring -- it was just an enemy with an armoured front and a lot of health. There’s now three of them that you have to fight at the same time while in orbit around a black hole. It’s crazy how long something can take, how large an effect it can have locally, but how small it is in terms of the whole to-do list. One thing at a time...


Rubicon will launch this year for $9.99 on Windows, Mac and Linux. Right now you can pre-order it on Cheerful Ghost using the Humble Store Widget. Currently, the game will be distributed through The Humble Store & Desura. We will be running a Steam Greenlight campaign in the coming months and if we are accepted everyone that pre-orders the game through Cheerful Ghost using the Humble Widget will get a Steam copy.

Yeah it's been a lot of fun to work on. Can't wait for people to get to play it.

It seems interesting, I'm looking forward to seeing a game play video. Do you think there may be a demo in the works?

Starship Rubicon: Jon Dodson is about to make you his bitch.

@GregoPeck: As far as a traditional downloadable demo, I am not sure. It's not on our development roadmap but we might get one out after launch depending how things go. If people want to try it, it will be playable at a OMSI event coming up in Portland.

@GregoPeck:
The original game that was funded by the Kickstarter campaign is available for free at:

Though so many things have changed in this new version I'd hesitate to call it a demo.

Cool, thanks for the link!