3 Died On Halloween - The Seven Stages Of Console Grief 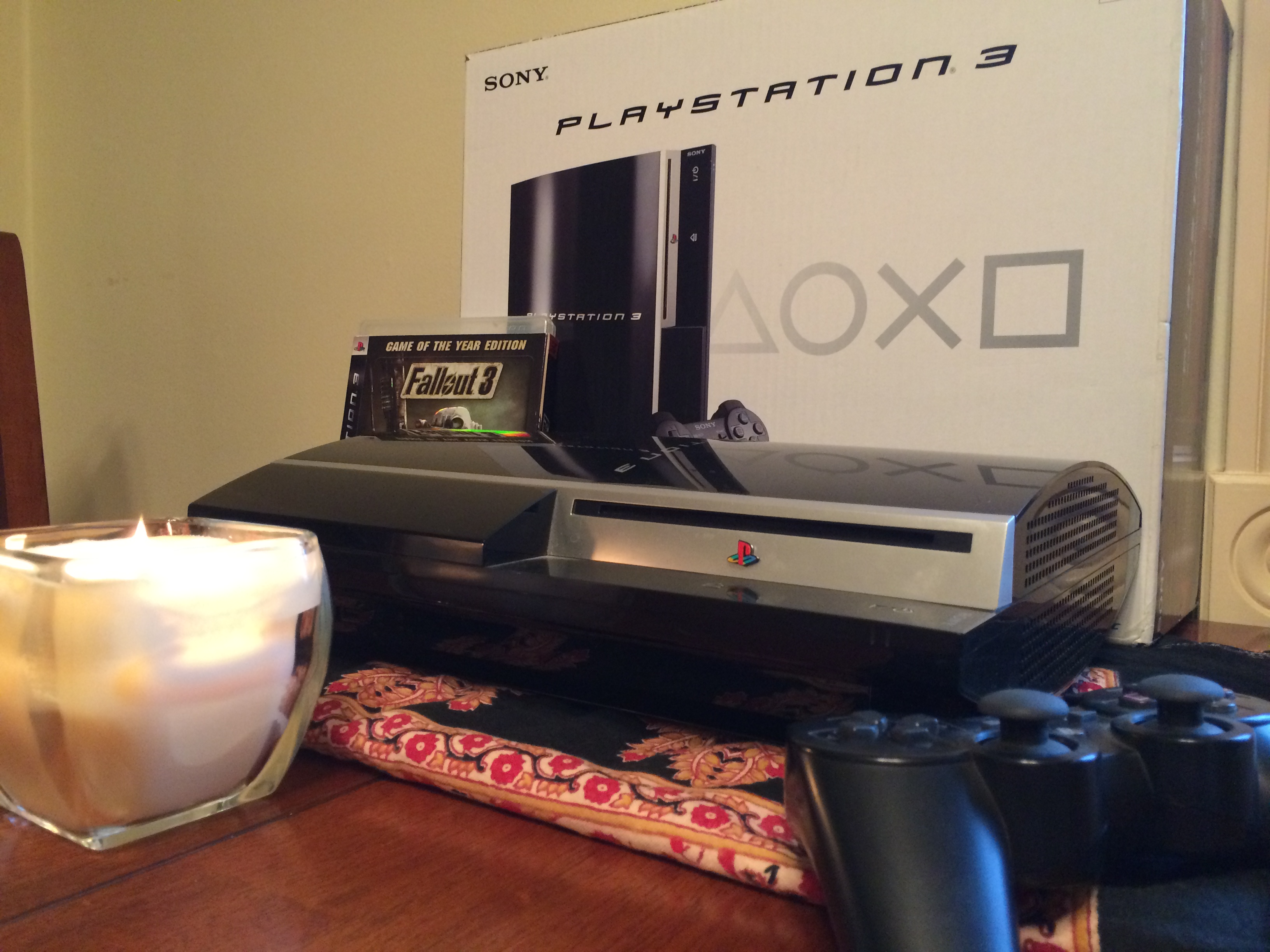 I was at the PIGSquad Halloween Horror Game Marathon when my wife texted me the news. My PlayStation 3 finally passed and it is a sad time around our house. It's been doing strange things for the past month so we kind of saw this one coming. Rebooting spontaneously and constantly needing to check itself for errors,it wasn't too happy in it's last days. Every time we'd boot it the "jet engine cooling system" would rev up and loudly proclaim it was in pain. It's nice to see it finally be at peace.

Over the last few years we've used the PlayStation 3 to play DVDs and Bluray films. I imagine that hurt 3 and deep down, 3 couldn't find a way forward knowing I had moved on to PC gaming. I'll never forget 3 and I spending 8 hours a day over the weekends playing Fallout 3 or completing Borderlands. I had the Orange Box and 3 was right there beside me and even though it was a bit buggy it was magical all the same.

Every year I have a Halloween party and this year I have setup a "Wake Station" above for attendants to pay last respects to my old friend. If you have any memories of PlayStation that you'd like to share, please feel free to do that in the comments I know 3 would like that very much.

You gonna replace it? I still found it to be the most affordable, capable Blu Ray player so even though I don't game on it as much as I used to, I replaced mine.

But gone are the saves. The games I played since cloud saving came around are fine, but 100% completion of LittleBigPlanet 1 and 2, I will miss you. My various Rock Band and Guitar Hero careers (which took a damn long time, mind) are at an end. GTA IV, Niko's life in New York has been erased from time. Red Dead Redemption, God of War 3, one set of Fallout 3 and Oblivion saves (but I have plenty of others on other platforms)... the list goes on.

Rest in peace, progress. You're still in my memory, but I can never revisit you again. Not the way you were.

It's in a better place.

My fondest memories of 3 definitely include watching RedLetterMedia movies.

My PS3 started acting up years ago.. It would shut itself off, even after only being on for a minute or so. Then it would have to check for errors. That was years ago, I can't say how many though. I thought it would die soon. However, it's still alive and seems to be doing fine now. I haven't really been using it, especially since I got my new PC. I was using it with the PS3 media player. Vinny's used it for various games including, but not limited to, Minecraft and Terraria.

Farewell old friend, may you find peace in that big games room in the sky.

> You gonna replace it? I still found it to be the most affordable, capable Blu Ray player so even though I don't game on it as much as I used to, I replaced mine.

That's a really great question. I am not sure right this minute. I am going to try and see if I can open it up and see anything obvious. If I can't fix it and I really don't think I'll be able to, I am edging to just buying a nice Sony wifi Bluray player. As much as I'd like to get another PS3 or PS4 I really don't play console games anymore.

I set aside all my PS3 games the majority are on the PC. In fact, the games I enjoyed most like Borderlands, Fallout 3, The Orange Box, Borderlands 2, Rage and UT3 would be the only ones I'd want to play again and I own many of those on PC already.

Looking at a brand new PS3 they seem to start around $250 and might dip less depending. That's more than i'd want to spend for a device I only use to watch DVD and Bluray. If I go used that would be fine but it would just break again. I only know one person (well now with Greg 2) that still have their original PS3, they usually all break. So a used one isn't a great option, it's just a ticking clock till death.

So right now a fancy Bluray player but I could go another direction.

$250? Damn! Anyway, when I researched the issue with my PS3, I came to the conclusion that the issue has to do with the thermal paste on the processor. I also had mine standing vertically, which isn't recommended, so I set it down horizontally. I did find some solutions to that issue, but none of them seemed simple. Those solutions also said that they could only extend the life of the PS3 for a little bit more until it happened again.

Since you already have a hard drive you can just get a 12gb for cheap and pop in the old drive. The key is finding one now, I think I lucked out. If you're ok with refurbs you can still get them way cheap.

I just checked the 12gb has no HD mounting tray, so that option is out. I didn't check Best Buy I checked Amazon and for the new quieter PS3, they start at $250 if I want to put in my old HD. Refurb and used are not an option i'd do.

"I just checked the 12gb has no HD mounting tray, so that option is out."

You can buy a mounting tray for $6, but you don't even need the tray.

More detail: The mounting tray just means the piece of metal the drive sits into so that you can easily slide it in and out of the PS3. The 12gb PS3 has the ports for the hard drive, just no mounting tray. But the tray itself is super cheap.

However, all you need is a piece of something non-conductive to make a wedge, or even a piece of electrical tape to hold the drive in securely. But if you don't want to live dangerously you can just buy the cheap one.

Proof: I have a 12gb PS3 and my hard drive is living there quite happily.

And yeah, oddly, Amazon is about the most expensive option in this case. That's very odd.

That's all really good to know, thanks Travis. That does make the whole prospect cheaper. Still wondering what the chances i'll ever play a game on it again are?

Eh, if Portal 2 hadn't come with a free Steam copy, you definitely would have gotten it one of the few times they gave it away for free. Gotta love Valve :D

I have a backwards compatible (PS1 and PS2) 60GB HD original PS3 still working fine. My cousin took great care of it and I bought it off him a year and half or two years ago. There's hope!