My Review of The First Level of Super Mario Run 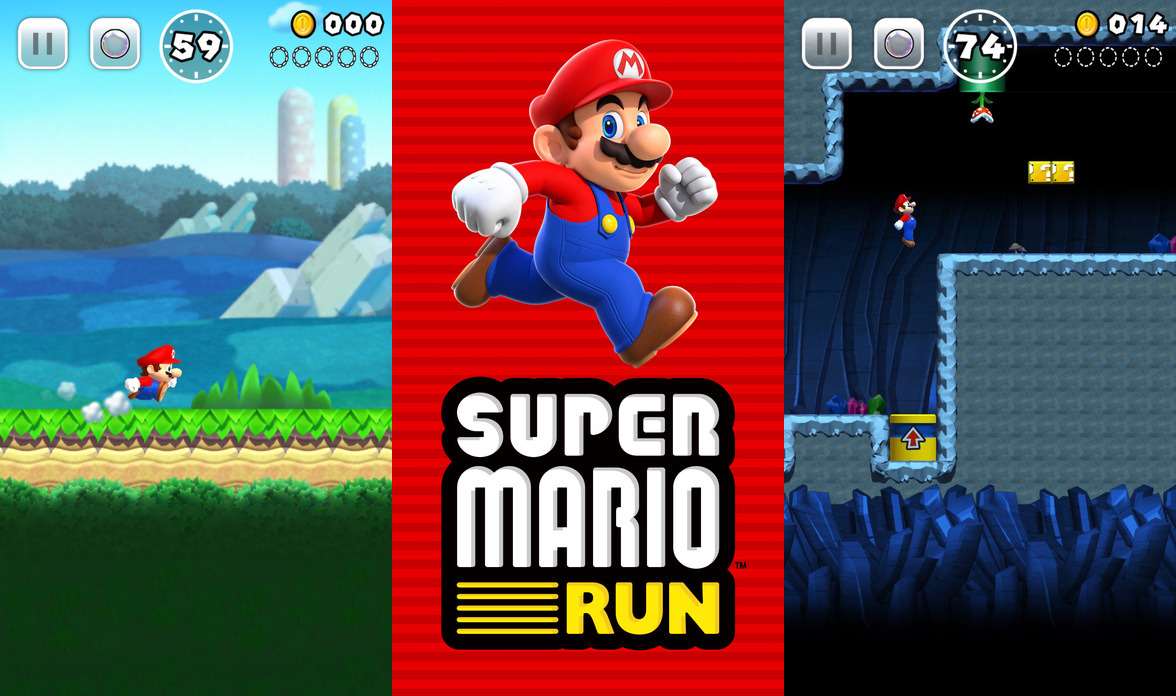 Nintendo dropped it's second mobile offering on iOS last week and it's great. Super Mario Run is just the right amount of Nintendo polish and classic Mario game play feel to make it a near home run. It suffers from a few things I don't love though like it's always on DRM and in game store. I don't mind DLC or buying things in game for the most part, but it seems the Toad Rally being ticket gated and the only way to unlock tickets is limited in game to completing levels seems a bit strange. That said, if you focus on the core game, it's fantastic and so far I've only played the first level.

Super Mario Run is a free to download game that comes with the first three stages at no cost. If you want to play the rest of the game you can unlock it for $10. I didn't plan to do this going in to the game but so far I've just been playing the first version of world 1-1 with the attempt to collect as many coins as possible. So far my high score is 237 but I think I can bump that to 240 with a fair amount of work. I've never spent time optimizing a run in a game before and it's very rewarding to keep doing a bit better than before. I've learned a few things about optimizing a Super Mario Run and might make a tips video for how to collect as many coins as you can. I'm not sure the things I've learned hold over to later stages but they work well in 1-1.

If you have an Apple device and some time you should download Super Mario Run. It's a fun game and even if you just play the first level for way too many hours like me, there a lot to like.

One of the biggest problems I have with Super Mario Run is the perpetual downloading of game data. The game size listed on it's App Store page is 173mb. I've played through the entire demo, and have since run into two instances where game data was being downloaded, increasing the games size (so far) to just over 345mb. That's just the demo levels. It's not the size, but the multiple instances of waiting for the game to... I don't even know what it's doing. Updating? I've already played through all the levels, so it can't be downloading any new textures or sounds. Whatever it is, it's weird and annoying. Nintendo is really good at weird and annoying. But they're also good at cute and nostalgic. It's Mario, for better or worse. Once you pass the first couple levels, play the Rally, and see the loop that their driving toward, then it all just feels like a really lazy way for Nintendo to make another small fortune. A mobile experience worthy of a $10 price tag, this is not. At least not by what's on show in the demo (I didn't fork out the money, so I'm only speaking relative to the demo). It's not boring, but I also found it to be uninteresting. Or at least, not as interesting as I was hoping it would be, for a Mario game.

I'm in agreement with scrypt. I don't have an iphone myself, but I went into an Apple store and tried out the demo. It was fun, but I can't see it being $10 worth of fun.

I wonder if the extra downloads were simply more levels to play, to have ready if you did buy the game?

I bought the whole game and have already gotten $10 of enjoyment out of it.

I have only had to do the extra data download once, when the game started. I have not seen it since, and I have played all 24 levels.

Jon, there are multiple ways to get more tickets. There are a few bonus games that unlock every 8 hours that can get you more tickets. Also, you get tickets when you finish a level (like you said) and collect all 5 of the special color coins for a level. Right now I am sitting at 51 tickets and have already done 66 Rallies.

Value is an interesting proposition. Someone may buy a game bundle for $10 and spend no time playing the games and think it was a good purchase, whereas someone else may not. Based on what I've played of the game so far(1 level) I think the $10 would be worth it but I've dropped a couple hours on that one level.

Bonus games that unlock every 8 hours for more tickets? Huh, well that's something but I still think the ticket thing is strange.

I really dislike how building your kingdom is dependent on the rallies, which are competitive, REpetetive, and can result in losing resources if you lose the rally. Toads from your kingdom come to cheer you on, but if you lose they'll leave. It's the kind of thing that you'd expect to see in a free-to-play game to encourage you to spend money on microtransactions, but there are no microtransactions here. I wish the rallies weren't required to get access to extra levels. You can build pipes and rainbow roads to take you to other levels but that requires a lot of grinding.

Plus on a few occasions I've been unable to play at all because of the online requirement, and I've even lost progress a couple of times. The rallies obviously need a connection, but there's no reason to lock out the main game. There are some cases when I'd normally play mobile games that I'm unable to, because the reception is hit-or-miss in those areas.

But the "Journey" mode where you play through six worlds of four levels is really fun. For an endless runner it's solid, probably the best I've played. I don't love re-grinding the levels to collect different colors of coins, but it does add replay. But more levels would also provide replay value and be far more interesting.

I'm not sure it was worth the $10, but at the same time I don't have any regrets for spending that money. I will say that the first three levels in the demo are not representative. A better representation would have been 1-1, 2-1, and 3-1. Things get more complex and interesting after the demo.

Also yeah, I've played the whole thing and I only got the extra download the first time I launched it. Scrypt I imagine you might have some other issue there.

I do like the Tour mode. That's enjoyable enough. All the other stuff reminds me too much of the Miitomo experience of playing mini-games to unlock cosmetics (which, for me, got boring after a while).

One of the reviewers in the App Store mentioned disappointment in the Rally mode, and said that it would have been cool if it was instead a challenge mode where you play other players created maps (similar to Super Mario Maker), and I totally agree. I'd pay $10 for that.

Huh. I didn't really look at the app store reviews but it's sitting at a 2 1/2 stars. That does seem quite low for a Nintendo game. Mobile is a tough crowd.

I have been playing a shit ton of rally. It is probably my favorite part of the game at this time.

The problem I have with rally is that your progress can be entirely halted by how well other people have played the levels in what amounts to single player. You're competing against the "ghost" of runs past. So I'll play and do really well and get 50 or so new toads then do less well or get outplayed by the ghosts of other players and lose nearly all of them. It's just frustrating. Halting progress is commonplace in video games, but *losing* progress, in a world building segment of a game, because you did poorly in a faux-multiplayer segment, just seems weird.

So since the game stops showing you players who are less than a few toads lower than you, we'll play up to a point where we can't progress, because everyone above us is better than we are.

I wanted to see what the princess cake unlockable was all about so I watched a youtube video. A guy with almost perfect runs was having a little trouble gaining the toads he needed because everyone with more toads was so damn good.

But I keep playing it because I have so many tickets. Your max is 99 and I've hit that a couple times. And with those bonus games that are easy to unlock you basically have infinite tickets. So why have tickets at all?

And plus I'd like to unlock the remaining two characters.

I guess the one thing I don't dislike about the rally is the actual gameplay-- the randomized chunks of levels makes for good replay, but the fact that you're playing against someone is a frustration for the above reasons.

Funny. I was just reading about a similar situation, in a completely different game. Certain elements of the game are trapped behind a skill-wall. Some players are obviously better than others, or become so over time, but to the point that those rewards are all but unattainable to the average player. The average player will eventually stop playing, because the only alternative is constant defeat and frustration. Half the people say that this is ultimately a design flaw, while the other half simply say "Get good." I'm in the "design-flaw" category, especially if the mechanic is in anything other than an e-sports game. Achievements/Trophies are the exception, because the accumulation (or futility) of these types of rewards has no bearing on the in-game experience.

Racing against someones ghost in Super Mario Run can be fun, but with in-game currency on the line, it becomes more like gambling, except that you have no say in the stakes. What would be a better solution for this problem? Maybe allowing you to wage a certain number of Toads before the race?

I'd say something even as simple as only losing half as many from a loss would give you the opportunity to progress a little further but the problems still persist.

Combine that with total random opponents instead of those ranked higher with you, and your chances of advancing go up while your losses are minimized.

I love racing against the ghost. I also don't mind losing toads. It knocks you back so you can win again! It all works for me. :)