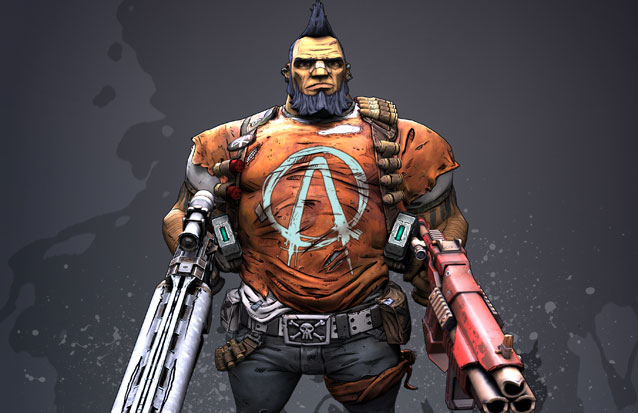 My First 5 Hours with Borderlands 2

Picked up Borderlands 2 today and started making my way through Pandora after Handsome Jack. My character is Salvador, the Gunzerker as I was most interested in playing him from the other new classes. I have quite a few thoughts about Borderlands 2 and am not really sure where to start. From a high level my first 5 hours were very fun with a few nit picks.

I really like that the game has settings other than desert. So far the game has all been snow for me, but I have heard it has quite a few new settings beyond the snowy mountains. The art style of Borderlands 2 seems pretty much like the first game but much much more detail in the design of areas. The original Borderlands had some really creatively designed zones but you really didn't see them until the later portion of the game. In Borderlands 2 they showcase some really fun stuff right away.

After getting used to how it works I really like Salvador's Gunzerking ability. Gunzerking allows Salvador to dual wield weapons but also immediately refills half of his health bar and also regenerates ammo and life. If I am not in a fight and have Gunzerking available I just hit it to replenish my ammo supply. I am currently sinking my skill points into the Brawn side of the skill tree.

The guns in Borderlands 2 feel better this time around. The skins are more creative and they just feel better to use. I found a few shotguns with explosive damage and a boss dropped a great pistol with fire damage. Overall I found another pistol with a bit more elemental damage but the boss drop has a larger ammo clip.

Everything seems like a refinement, from the menus to the auto drop pickups to the shooting. The game is very polished and compared to other game launches Borderlands 2 isn't laggy and I didn't notice any bugs to mention.

The game has more chuckle moments and the writing is better. Lots of funny lines in Borderlands 2 I enjoy quite a bit. As my wife was listing to a bit of it she said it sounded like Portal 2 but less funny to her. Handsome Jack does try to grate at you in the same way GlaDos does and if my wife didn't say anything I wouldn't have thought about it.

Stuff I Am Unsure About

Don't get me wrong, Borderlands 2 is fun... but well. This doesn't seem like that much of an upgrade from the previous game yet. I mean, the game might open up and kick my ass in spades later on, but it just seems like more Borderlands. Which again, is totally awesome it just didn't floor me with its Borderlands 2 newness. I had a ton of fun and am looking forward to playing more of it, I was just expecting more I guess.

Borderlands 2 is much more challenging that the original. At the start I was pretty unhappy I was getting destroy as hard as I was. This may be due to me going back to the PS3 controls from playing so much on the PC. Regardless, the increased difficulty is something i've heard from a few people online. After a few hours I was adapting to the increased difficulty. I am completing all the side quests as I did with the original and that is making progressing easier. I wonder how hard the game is for people that skip the optional missions?

Overall I am not sure the DLC is worth that much. If you pre-ordered Borderlands 2 you got:


You unlock a few things if you have a previous Borderlands save and all told that stuff seems cooler to me. The Mecromancer is the best bit of the DLC by far for pre-ordering but she hasn't been released yet. I have high hopes for her character.

A Few Things I Noticed

It seems that there are no ammo capacity upgrades. At least, the vending machines so far don't carry them yet. Have you found any? I imagine they are present in some form.

You get elemental weapons much earlier in the game than I remember getting before. They are also much more varied too after a certain point.

When you first start out, you get a handgun. Takes a bit before you get a good gun and then its not a great one. The game takes a few hours hours before you start getting useful weapons.

My first 5 hours with Borderlands 2 were fun. I loved Salvador a lot and upgrading him through his abilities will really open the game up for some more varied and fun play. I really like the new guns and am enjoying the loot system. The game is challenging, but its not impossible, overall I like how hard it is after I figured things out.

I watched the review of Borderlands 2 by the Totally Rad Show. The guys had mixed thoughts about it and after playing it for 5 hours I understand why they would.

Ill post more of my thoughts as I continue with the game in the coming days. What do you think, how is Borderlands 2 playing for you? What class did you pick? Did you customize it much beyond the default?

So I've put in a good chunk of time now as well. Thanks again you guys. I'd like to make a few small comments and perspective points of my own.

The rarity relic is stackable when playing with others. so that's 20% higher drop rates. In an rpg standpoint that can be hugely significant especially since this game does not use MF (or magic find).

The guns are hugely varied especially as the game progress's there's even a new special type of weapons you can get similar to the special alien weapons but i won't spoil them for anyone who hasn't yet gotten to that. That to me makes it feel fresh.

You can pimp your vehicles (+ something extra again won't share on here) now and while the customization of characters is not super special. I still find it highly enjoyable to change around how I look and there are a lot of choices in that respect.

The environments truly are varied. And since i can comment on the PC side of things. The physX is off the charts. I got a grenade launcher assault rifle and when you fire it into the air it literally is a hail of shrapnel that falls down from the sky covering a huge distance.

The challenge to me is much desired. Borderlands even a few days ago I went back and played and I can just run over everything without even trying. In borderlands 2 if i wasn't playing with my friend it would probably be quite the challenge. Very engaging and makes some intense "oh shit!" moments.

Overall while there was a few things that kind of are iffy this is an amazing game. Such as running into your team mate who's with you can cause kind of an invisible barrier to prevent you from running forwards. (even after he's moved) Just a few minor issues. However, the game is extremely well optimized. You can even alt tab about 100 times with no slow down in the performance of the game.

As a final note of criticism the skill trees while better and greatly enhanced from borderlands. I still would wish to see them try to amp it up a little farther. Like multiple skills and skill trees for separate things. Like grenade skill trees. Meele skill trees. Athletic skill trees. (This coming from someone who really enjoys rpgs and customizing my character)

Your right, a few times I got into some crazy awesome fights I barely made it out of! So much fun ;D

Oh, what are you playing as?

I like the customization to, but aside from making Salvador more red I haven't done much with it. Nice to have though.

I'm playing as zero right now. But we are starting for real tomorrow with my brother and I'm going to be maya. my bros axton and my cousin will be salvador. Going to make a full speed elementalist build.

Man, reading everyone talk about the game is getting me really excited. My copy should arrive before the weekend gets here, so I know what I'll be doing in the evenings. :D

I'm playing as Maya as well. I loved Lilith in the first game, and Maya is similar. I definitely want to try out the other classes more this time around than I did in the first one.

True that panicked. I only ever played mordecai in borderlands 1. Going to have to try out all the characters this time. Although I find in ability comparison, zero is the closest to Lilith. Just without the speed. He is able to run through all enemies while invisible. However Maya still feels set around a similar gun set. Especially if you use the elemental tree path. Then it is pretty close to Lilith. Since smg's still seem to be one of the best weapons for elemental effects. Double that by the fact there doesn't seem to be "auto" pistols as much anymore. In borderlands they had some crazy rate-of-fire pistols.

I know, I had some sick pistols in Borderlands 1. At one point the pistols were better than the sniper rifles I was finding. Then I got some really OP sniper rifles.

This time around I am doing well by incendiary damage pistols and shutguns with the Gunzerker.

> hated around gems Should be GATED 🤣

So with these kinds of free to play games it seems...

I haven’t played in a week or so. Focusing my time...