If an Attack on a Compound Occurs That No One Sees... 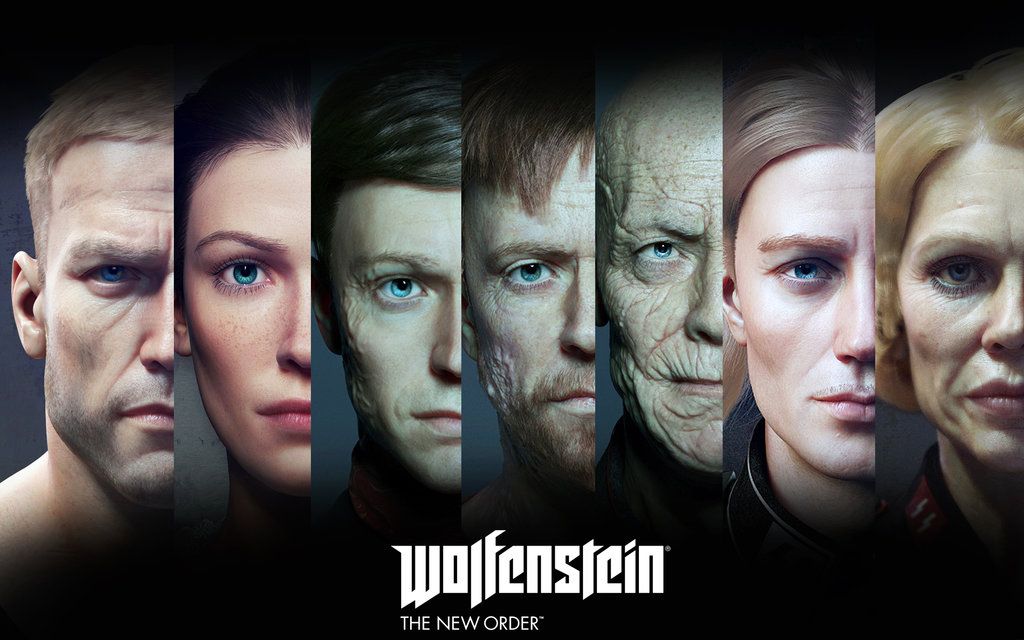 So, I'm just now finishing Wolfenstein: The New Order, and was quite pleased with the bulk of it, but I have a couple questions. Firstly, am I supposed to beat the game on Uber to get a more complete ending? If not, are we to presume that B.J. dies, or does the sound of the helicopter after the credits imply that he was rescued? Secondly, and more importantly, I totally thought the whole thing was going to be some dream or hallucination, due to the events that happened shortly after the Nazis "shut down" the asylum at the beginning of the game. When you are running around in your hospital gown, killing lots of Nazis, the colors on the screen change drastically from blue to red tones, which implies to me that there are two realities at play, or at least two perspectives. If you say, "well, that's just him getting used to walking around again, getting his bearings", then why didn't the same thing happen after Bubi stabs you with a syringe full of Nazi juice? You pretty much get over that right quickly. Something that also made me think that something else was at play, was Fergus' (I saved Fergus) attitude and demeanor half-way through the game. For the sake of double spoilers, I'll just say that he doesn't act like himself, or at least the Fergus that I was rolling with earlier in the game. Granted, over a decade had passed since our last encounter, and a lot of shit happened.

Anyone have any insight? I could go roaming the web, but it's dark and I'm lazy.

I don't think they would do the "it was all a dream" thing. It would cheapen it significantly. I think the ending was left ambiguous because it works well as an end to BJ's story, or as a great segue into a sequel.

What do you make of the lighting change in the asylum when BJ comes out of his dormant state? I especially thought it interesting that there were several references to the shrapnel still lodged in his brain. There were other comments to, by Fergus, that I thought sounded like he was implying that the situation near the end of the game was ideal for BJ due to him being a Nazi killing machine, compounded with the fact that almost the entire world was now Nazi's (I'll have to go back and listen more closely to what he says).

You know it may have been. That might be how they bring the world back to normal? Glad you wrote this bEcause I honestly hadn't considered it.

I _HOPE_ ey are going to do some DLC because I'd love more of the game.

Playing through again through Wyatt's timeline is proving interesting. With my perks leveled up as they are, Uber doesn't seem as crazy as I thought it would be, but I'm assuming will be pretty brutal against Mecha-Deathshead. I really like Wyatt's story, so far, even if the "choice" interaction seems a little more contrived here. Wyatt feels guilty for the people that died under his command, I get that, but he also seems like a thoughtful, more empathic soul than, say, Fergus, and the animosity toward BJ for the choice that he made doesn't feel quite as believable. I really like the implication of "J" and what he brings to the story. One of the better game+ experiences I can remember.

One thing that really sucked, was going through the submarine. It just made me wish MachineGames would make a Bioshock game.

Yeah, I bet they'd do a great job with it too.

I saved Fergus in my first playthough(I think most people did) and want to play it again saving Wyatt. Interesting they let you choose so you could come back and replay it.

Sounds like you liked the Wyatt choice better as far as the story went?

Again, I've been drinking (see your latest PAX post), but I think I do like Wyatt better. Fergus is a bit of a downer. Wyatt has a small breakdown when you get to that "choice" FMV, but otherwise, he's a really positive person, despite the hell that's around him. I think, in terms of how I would rather handle a situation (like Nazi's taking over the world), I'd rather have a positive view of the hell I'm in, as opposed to being bitter. Not that Fergus is a bitter character through and through, but he leans on it hard sometimes. Which might just come from age. They've both seen, and been through, some shit. They both have a reason to hate the world and the people they hold responsible for leading them to it. Wyatt just seems to handle it with a bit more grace. The impact to the story, though quantifiably small, is enough to make the experience uniquely different.

Yeah, I didn't see that character at all when I played the game. Good reason to head back to it.