A story of loots lost, strife, and a crappy alpha.

If you're Garry (of Garry's Mod fame...) and you like DayZ, but hate a few key points about the game, what do you do? Well, the logical answer to that question is "Make your own Zombie Survival, Sandbox, PVP game with a healthy dose of Minecraft" and that's exactly what he did.

Rust throws you into a very familiar environment in terms of "EVERYTHING CAN AND WILL KILL YOU, OH MY GOD." For the moment, there are zombies (these are apparently getting pulled out at some point...), animals, and the most terrifying of all: other players.

So what makes Rust stand out from DayZ? Largely the minecraft piece makes it really enjoyable to play. In DayZ, if you died... that was it, you started from scratch all over again and you were lucky if you had some gear stashed somewhere that you could survive long enough to get to. In Rust, you're able to build your own base. Now, keep in mind that bases aren't impervious, and people can generally ruin your day if they're dedicated. You can also craft weapons and weapon mods in what is a pretty simple system (once you get it down...)

If you're into emergent gameplay, PVP, and dealing with a game that is squarely in the alpha phase of it's development, you should give Rust a shot. I find it very enjoyable.

I'm interested in Rust, but not yet. I'm waiting for the possibility of medium-core servers, or something to that effect. The first time all my hard work gets ruined by someone trashing my base and looting everything is the exact moment when I ragequit and never play it again.

Thanks for posting this.

The idea of Rust is interesting but I am not sure as it stands now, is that compelling. I think at some point when it hits 1.0 I might check it out though. I am really interested in a game that could nail survival and the cut throat nature of a world where you need to do what you must to live. I really enjoy post-apocalyptic fiction and haven't found a game that really nails that well in terms of having you feel like things are scarce and you have to do nutty things to live.

Garry just did an interview with PC gamer that illustrates a few points better than I did.

The great sandbox in the sky Kerbal Space Program (known colloquially as KSP) is one of those diamonds in the rough. I started playing back when it was a fledgling little alpha where you could barely get into orbit, let alone get off of the pad in one piece.

The premise of KSP is this: You have a bunch of bits to build a rocket. From there, you can perform orbital maneuvers, visit the mun (KSP's version of the moon) or send a probe into deep space. Normally, this kind of game wouldn't pique my interest this hard... but the feeling you get when you get into a successful orbit just can't be beat. Seeing your rocket stage and surge through the atmosphere conjures feelings that the first aerospace pioneers must have felt. But you're doing it in your underwear, at 11 pm on a school night.

To be fair, I was wearing PJ's... but I successfully docked two craft in space last night. That's what the latest version (0.18.1) has granted you. Along with a nifty orbit calculator to help you plan burns for transfer orbits, interceptions, and ultimately: landings. People have been making all kinds of nifty things including a GPS style satellite network, space stations, moon bases, etc.

Go watch some videos on youtube to see what people have been up to. There are some awesome community projects up too like this one: http://forum.kerbalspaceprogram.com/showthread.php/31129-Community-Space-Station-%2818-0%29%21 which is literally a crowd-sourced space station. How cool is that?

I like the concept of a space program sim of sorts.

Does that crowd source space station exist because the game has some sort of online functionality that allows people to co-exist in some fashion?

It's a communal save file. I have a feeling some multiplayerness may be in the works in the future, but for now it's "old school."

Thats a good way to do it without the online portion. After we had our CG Terraria server, I handed out the save to everyone from our world so people could have a record of it.

Pandas in the Mist. 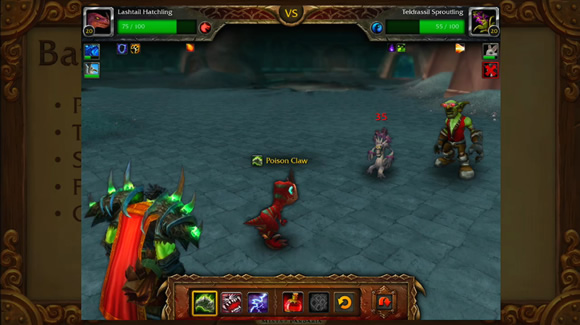 I wanted to hate it. I wanted to mock it from behind my usual standbys of EVE-Online, TF2, and DayZ. For a while, I probably did hate it... Then I saw it was on sale and wound up buying it and re-activated my account.

Class changes aside, I've grown to...actually...like Mists of Pandaland. One feature I thought I'd abhor was pet battles... Boy was I wrong. Remember waiting half an hour for Heroic queues while you ground away on a couple of dailies? Yeah, not anymore. You'll assemble your pet-battle team and go lay waste to whatever furry creature you can find in the forest. Oh, that one has a blue border? YOU'RE GOING TO CAPTURE IT AND MAKE IT YOUR BITCH. I've taken to calling it "PokeWow" since that's the easiest way to explain it for non-believers such as yourselves.

In the pet battle system, you get to have your choice of 3 pets for your team. Of these 3 pets, each has 3 abilities. You use these liberally FOR GREAT JUSTICE. You can capture pets that you have sufficiently weakened and add them to your repertoire.

Really? It's just a fun time-sink. You have slots for 650 pets. GOTTA CATCHEM-ALL.

The pet battle system was the thing in the Pandera expansion I was the most interested in so its good to hear it worked well. The interesting thing about new entrants into the MMO space is that they have a bunch of awesome WoW expansion to contend with.

The other day I started Planetside 2 and had no idea what I was doing. Nothing letting me know what was happening, nothing giving me a pro-top to what to do next. The game is a cool concept, but the original Quake does a better job of teaching you how to play the game. This isn't a jab at Quake but a slight against a new MMO like Planetside 2 that doesn't really show you what the deal is.

Oh and how many pets have you collected so far?

Something like 65 I think? I meant to check last night but I was busy trying to build an epic space station in KSP.

Nice. I was playing Dragon Age: Origins last eve. So fun, gonna write about it soon.

By Jason_Taylor on 12/17/2012
ARMA 2
I really wanted to like DayZ, and for a while I think I legitimately did. I still remember getting chills the first time I heard a zombie aggro me, running through some shitty town on the coast of Chernarus in the dark. DayZ is not without its fair share of problems however.

DayZ, for those of you who don't know, is a Zombie Survival mod for Arma 2: Operation Arrowhead. You start out with next to nothing and have to scavenge food, weapons and other various supplies to ensure your survival. The multiplayer component can be co-op, but is largely PVP based. "Who's shooting in Cherno?" being a common question of neophytes. Congratulations, you just gave up your position and will most likely die in the next 5 minutes.

The "End Game" largely consists of living in the wilderness, trying to fix up a vehicle to use, and living out your days as a kind of virtual Ted Kaczynski. Daily raids into nearby towns to collect supplies are usually cut short by hordes of zombies and or a few players coming in to ruin your day. It doesn't matter how nice your "kit" is or how long you've been alive, at some point, you will die in some stupid fashion to Arma2's broken mechanics (oh, Surely I can jump off this 3' high loading dock... *CRACK* and no morphine? I guess you're crawling your way to the nearest hospital.) or to one of the many hackers/scripters that feel the need to use their godlike powers for childish evil pranks.

All in all, it's an alright game. It's made much better by having friends to play with (of whom you will probably die to from time to time... it's part of the experience!) however I would simply wait for "Stand-Alone" to come out.

I think I will wait for the sand alone too. That said, the idea of being alone the wilderlands against Zombie hordes sounds awesome.

One of my friends hit me up with a video of some troll that made nice with another player, they went through the game for a few hours and then as the guy had his back turned, killed him and took all his stuff. Classy.

yeah, that's essentially DayZ when it comes to PVP. "oh, you have nice stuff, I think I'll take it." In the end, I just wound up using some ~special powers~ to fix up helicopters, fly them around, and give boxes to people (every item in the game...) That's what the endgame is.