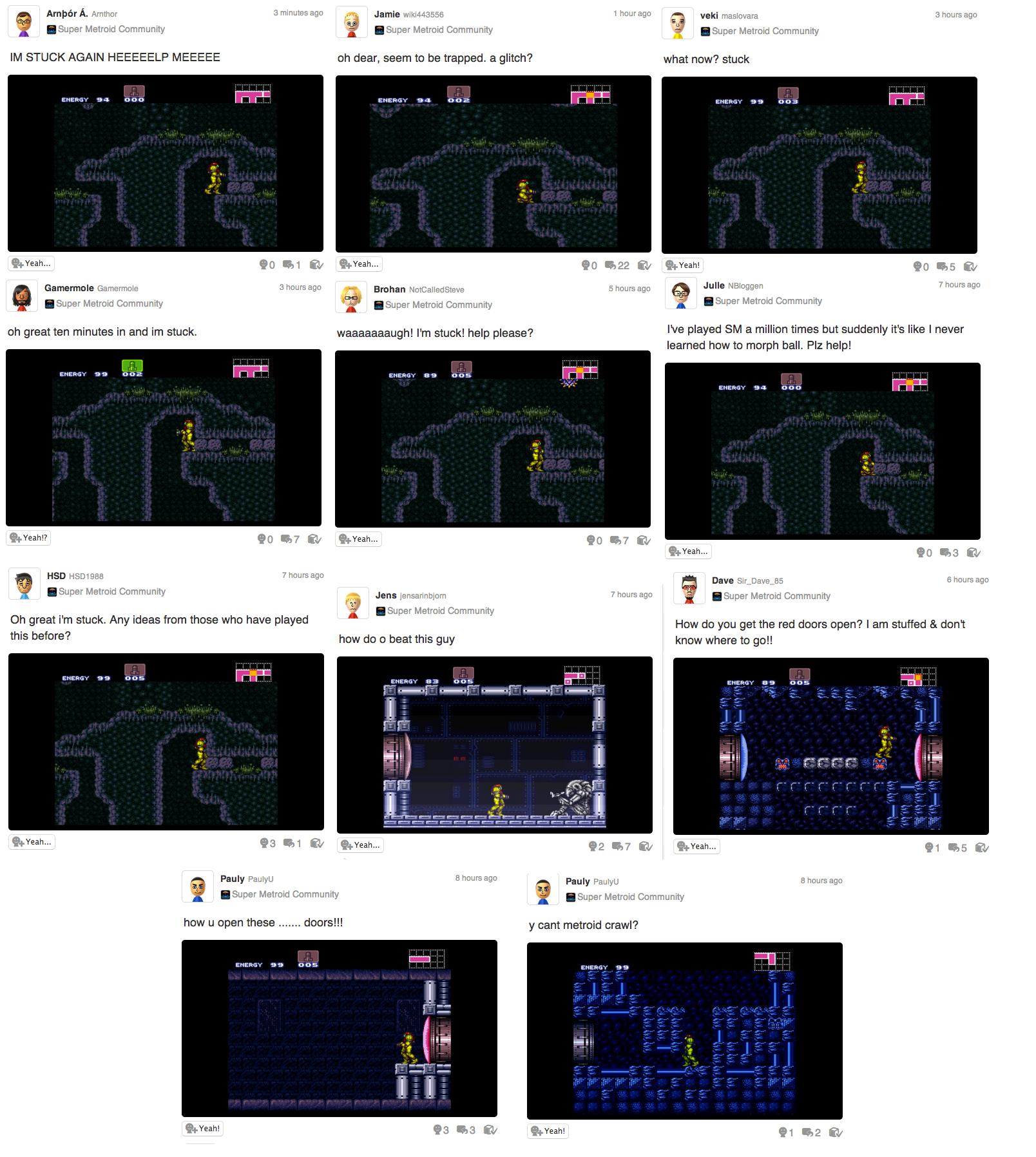 Click to embiggen the image above and take a look, then come back for more.

I want to preface this by saying that this is not intended to ridicule anyone. Please bear that in mind.

The image contains posts on the Super Metroid Miiverse page from quite a number of people who have gotten stuck in Super Metroid, mostly at the same place. I can clearly remember the wonder of playing this game the first time. It was my first Metroid game and when I got to this area I just assumed that I would come across something later that would let me get through.

These posts, however, show that things have changed. There was no NPC standing there telling them that this was blocked without a certain tool, or something to that effect, so they had no idea what to do.

Again, I'm not intending to make fun of people, but this shows more clearly than many other examples how the gaming landscape has changed. Modern gaming holds your hand and tells you everything you need to know. We hit a roadblock and backtracked to find somewhere we *could* go, but these posts show people hitting a roadblock and have no idea what to do.

I also don't want to sound like a bitter old man, talking about how gaming was better back in my day. It wasn't, necessarily. Bioshock Infinite most definitely held your hand through a lot of things, but it's some of the best time I've spent gaming. The Terraria wiki, the collective knowledge of everyone who has played the game, is basically required to know what to do for a large part of the game. While it's not the game holding your hand, you benefit from having a guide with you at all times. The new Tomb Raider had puzzle rooms that you could pretty much see the solutions to with a click of a button, but it was one of the most engrossing games of the past few years.

I guess what it comes down to is priorities. The early 8 and 16 bit systems didn't have the hardware for cinematic gameplay. It was basically all a puzzle or a test of hand-eye coordination. You were beating the system with your mind and reflexes.

Games today can spread their focus. With games almost universally coming with fully voiced dialogue, the ability to really wow you with the environments you play in, and all the other benefits that have come from higher-powered hardware, games can appeal to casual gamers as well as hardcore gamers.

Basically, the game has changed, for better and worse, but we're still having fun aren't we?

First off the image above is kind of funny, but yeah, its not awesome to ridicule.

I've had that in my head for the last few days it is quite funny :D

That said, yeah you know games are different than they once were. I have to admit, Super Metroid does contain some head scratching moments, but those weren't it for me. When I borrowed that game from my friend he lent me the Nintendo Guide for it, and ill admit I needed it quite a few times.

That said, games now days, yeah the do use waypoints and lead you in the right direction more than games of yesteryear did. Then again, there were a few games where the only way to go was right.

I think the Terraria wiki is a good thing though. The chances I would find some terse combinations of things to build are minor. Some games need deep hidden secrets, but games like Terraria, I don't know. Id rather know what I can build up front I guess. That said, when Starbound drops the wiki will be sparse so in the first few months we will all be discovering things. I think that sounds like fun, but at some point knowing what's possible with the game is awesome too.

I dunno, I thought Super Metroid was really good about introducing new players on how to play the game. It may not have a whole lot of text boxes or NPC's saying "do this" but the game was definitely designed in such way that players can easily discover how to play the game. Don't know what I mean? This guy outlines it pretty well: http://www.youtube.com/watch?v=rcrdJD8whfE (you might know him from some of his "Game Theory" videos.

Now since you guys were nice and not ridiculing the people in picture I won't ruin the moment too badly, but let's just say those players really have no excuse for having THAT much trouble with this game. ;)

Especially since I know exactly where that area in those first couple pictures is at in the game, and there is ONLY ONE DOOR down there that leads them to the proper tools needed to get out of that area.

I've lost all faith in the youth of today. Back in the golden days, you needed red keys for red doors, maps were abstract and hard to read, and if you saw an arrow telling you where to go, you figured it was a trap! There's no surprise that Bioshock ∞ has the "1999 mode" (though I though games were harder in the 80's/early 90's).

I know it's the fault of game designers. They figured out that if they just hand people exactly what they want, people will pay more for it. While I can't really blame them for that, what's the point of the internet if I can't be a bit irate, surly, and overly sure of my own perspective?

Then again I just picked up Dark Souls...that sucker's hard.

"I've lost all faith in the youth of today. Back in the golden days, you needed red keys for red doors, maps were abstract and hard to read, and if you saw an arrow telling you where to go, you figured it was a trap!"

People play what games are available to them. The majority of games designed now are one size fits all way-point paradises. One could blame "the kids" but its really designers and triple A companies that make this trough-ness. That said, I like some of those games but there are games that don't fit inside that mold.

Anodyne, CaveStory, Terraria, Minecraft, etc. "The kids" play those too, lots of kids.

Oh, I know... for every Candy Crush there's a Binding of Isaac.
I guess, like any other medium, there will be different "levels" of involvement. I haven't seen a single movie nominated for best picture for the last three years because I don't feel like trying to watch anything with that much of an investment. These days, when I got to watch a movie, I purposely avoid anything that will make me think. Sad? Maybe. Movie's just aren't that big of a part of my life.
I guess I can accept that there are gamers like that... but I that doesn't mean that I don't get to condescend.

I don't know that the good old days were always as good as we remember them. I certainly have fond memories of gaming on almost every system since the Pong machine, but there was a lot of games that were just clones of other games, or expanding on a proven mechanic. It wasn't all clever challenges or epics of great design. What was essentially different between Metroid, Castlevania, Blaster Master, or Rygar? Not much. The puzzles varied, but the ideas were generally the same. If you knew how to backtrack in Metroid, you knew how to backtrack in Castlevania. Don't get me wrong, I love those games, and credit them for helping to make me a better problem solver (or maybe I just had a lot of patience for running around), but things were different back then. Now we move in three dimensions, and the area of the game worlds can be staggering. If Skyrim didn't have a quick travel system, or the occasional NPC telling me to "Go explore this cave for the key...", I would be too overwhelmed to play. Too many variables and not enough time to devote to pure adventuring. We still have our challenges, though. Portal is a great example of a recent game that doesn't hold your hand. You get a genuine sense that you are discovering this secret, by means of your own ingenuity. Demon's Souls/Dark Souls, Super Meat Boy, Antichamber, Braid... a few others that challenge the brain as much as the nimbleness of ones fingers.

Remember, too, that we had the Nintendo helpline back then, and it was successful enough to keep around until June of 2010. Not everyone figured it out on their own. We just have the internet now to humiliate them :).

@scrypt: Or that people dump wads of cash on F2P games so they can win faster. Heck i've read about people dumping money on the D3 auction house because they have lots and just want to kick ass. I don't really think that kind of thing is bad, I guess whatever people have fun with. And I totally wish I could have called the Nintendo Hotline, we could just never afford it :D It seemed so magical, but now internet searches take care of stuff.. or wikis.

@Tungsten: That makes sense. I do enjoy Films, but go to the theater less than I did. I just saw the new Trek movie yesterday, it was a great ride but I really enjoy watching shit at my house more. So many annoying movie goers, but still, nothing quite like Cinema.

Looks great! Grew up on the Ghostbusters. Love all...

This looks really, really fun. I can't wait to see...