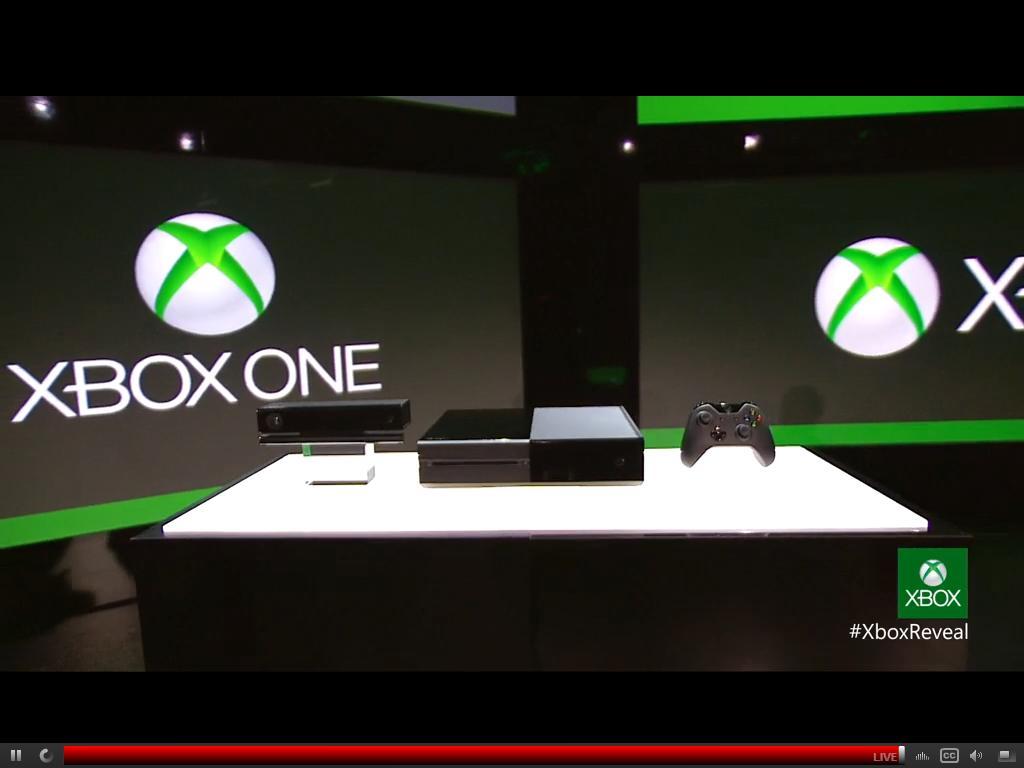 EDIT: Putting this at the top because it's a hot-button issue that people have been wondering about. CVG is reporting that installing games is mandatory, and that installing the same game by a second user will be behind a paywall. It isn't exactly blocking used game sales, but there will be some sort of fee.

It's a pretty slick looking box, but can we just talk a sec about the name? How many kids are going to get a used original XBox for Christmas?

It boasts a lot of interesting features. Here are a few:

THEY FIXED THE D-PAD

It will be all in one system, has TV capabilities, and will allow you to switch between TV, games, music, etc. instantly.

It comes with Kinect out of the box.

You can control it with your cell/tablet, probably with the same kind of app as SmartGlass.

You can skype with your friends while watching movies (and I wonder if skype and XBox Live will have more integration).

It can switch between Windows and XBox os. Perhaps we'll start seeing more of why they did the things they did with Windows 8. If you can navigate the Metro interface with the controller or Kinect, that would actually be pretty sweet.

I'm wondering how the Windows thing will work, and since this is running on x64 hardware, how long before someone hacks the OS to run on normal PCs. Also, if the Windows side is a Windows PC as you'd expect, this seriously may be a buy for me depending on the final price. How awesome would it be to boot up your XBox, play a game or two, then switch to Windows, load up Steam, and play PC games? It could be serious competition for the Steambox if they allow that. Even if they don't, if I can replace the functionality of the XBox 360 *and* what I use the PC I have connected to my TV for, this is seriously tempting. I had imagined skipping this console generation to be honest, focusing on PC gaming, but this alone may change my mind.

Tons more to be seen. Follow along with livestreams and such below:

Watched the stream up until half way and then it cut out. Not a bad thing, it was interesting up until the EA stuff and I sort of got bored. I don't really care much about hearing from EA personally.

That said, objectively this looks like a really wicked sweet console. Won't be perfect, but it looks like it handles the TV, Movies, Music and lastly games workflows well. I think that important to note because it seems like Microsoft isn't making games the larger focus. Not condemning it, just noting.

I have an outstanding thought that next gen consoles will suffer because everyone has enough magic in their living room in terms of stuff under the TV. Plus Smartphones. So will people buy yet another thing that is more better? Some obviously, but I wonder if the poor Wii U sales are just how this next console generation will be? Just a question really.

Again, looks like a cool system but not aimed at me. I can Netflix, DVD and BluRay to my entertainment satisfaction and I don't watch live TV. But I could see where this would be a insta-purchase for some and the first consoles some actually get, the use-cases are quite striking for who they are targeting.

Here's the microsoft site for it http://www.xbox.com/en-us/xboxone/meet-xbox-one

From Microsoft's Xbox One site: "Xbox One gets to know you. It learns what you like and what you don’t."

Pretty sure it won't pick up on the fact that I hate advertisements on my paid-for product, but whatever. This is pretty much what I was afraid of, more of the same. Microsoft is moving the Xbox further away from a pure gaming experience, and they can keep it. The ability to play games after installing, without a disc, is something I've always wanted, but not in this package. And a fee for used games? Forget it.

Yeah, if you are not keen on Microsoft's design choices I don't think the XBox One is going to be for you scrypt.

Hey Travis, are you going to pick this up?

It depends on their plans for used games that they haven't disclosed yet, how backwards compatibility works, and how fully-functional the Windows install is.

With used games, I generally don't bother anyway. It's only $5 cheaper at Gamestop, and if you want to get it cheaper you have to go to Craigslist or eBay or something like that. So I prefer getting new anyway. I may not like the decisions MS makes here, but really when is the last time you played a used PC game? I think this is the way things are headed whether we like it or not, and it doesn't affect me greatly anyway.

But if their Windows install will let me install VLC and connect to a server where I have all my media shared, and especially if I can use Steam on it, then it's probably going to get my money. I can effectively replace two machines.

That is, of course, assuming I can still play my 360 games. Since it's on different hardware I'm assuming there would have to be some kind of software emulation here, and I don't know if they'll have that.

I do the used thing on consoles, generally with older titles that are $10-$20. Its a nice way to try something I wouldn't have otherwise and got a few ps3 games that way. Its how I got into the Elder Scrolls series, picked up Oblivion for $10 on PS3.

"Xbox and the NFL are partnering to shape the future of football — forever changing the game. Xbox One will transform the way fans experience the NFL from the living room, through an unparalleled, integrated fantasy experience on the television that is truly social and personal, and new innovations in connected experiences with Skype and Xbox SmartGlass. Xbox is proud to be the Official Interactive Content Provider of the NFL."

I saw this paragraph on Best Buy's site. It might have just tipped the scales from PS4 to One. But I'll wait and see of course.

Yeah in the reveal video the fantasy integration looked pretty good. If you watch live TV and play fantasy football on ESPN this might be your jam :D

I still need to watch the revel video. It's blocked at work, and last night I was busy, but I look forward to it!

Hahaha. Both. I have a Mac Mini, Wii & PS3 under the TV. Id have to start tossing out systems to add another one and each one serves a purpose. Only one new system (as of now) will be compatible with all the gear of the old one and thats the Wii U. Say what you will about Nintendo, but they do that part right.