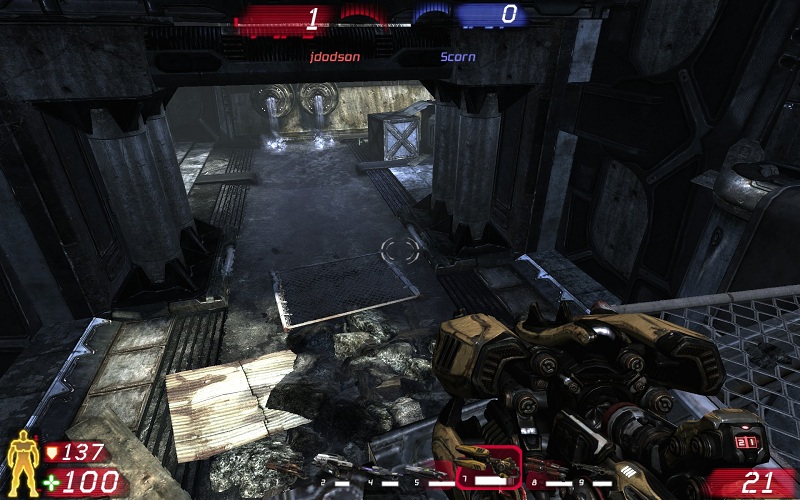 I consider the original Unreal Tournament games to be some of the best FPS multiplayer games ever made. I played the heck out of Unreal Tournament and then later went nuts for Unreal Tournament 2004. Now mind you, I am not very good at competitive shooters but Unreal Tournament allows you a fine grained control over bots such that anyone can get in the game and feel like a total bad-ass. I own UT, UT2003 UT2004 on plastic discs but when the recent UT franchise Steam Sale hit, I decided to pull the trigger and pick it up.

Unreal Tournament 3 Black is a worthy successor to the Unreal Tournament legacy. The Steam version includes the UT3 Titan Pack, which adds in a few new game modes as well as maps. After I downloaded and installed all the UT3 Community Bonus Project maps I tore through a few awesome maps and had a ton of fun playing Deathmatch and Capture the Flag. The awesome thing is that UT3 was released in 2009 so if you have a relatively new computer you can run it with the settings dialed up and the game doesn’t suffer from any kind of lag.

The game is very polished and overall a very good competitive shooter. I decided to try my luck and head online for a few deathmatches and was surprised to find out I wasn’t too bad. I imagine many people picked up UT3 from the recent Steam sale and were about as good as I was because I scored right smack in the middle out of the pack on the server I was playing on. The community for UT3 is still pretty strong and there seemed to be a few servers that were full of people playing.

Let me know by way of posting in the comments if you have UT3 and would be potentially interested in a Cheerful Ghost UT3 frag night in the upcoming months. Unreal Tournament has as special place in my heart as an awesome shooter and UT3 is a really awesome continuation of that awesome legacy.

If you are just getting started or want to head back into the area, you should nab all the awesome Community Bonus Pack content:

Picked it up on the Steam sale, per your previous mention, and installed yesterday. I'm totally down for the massacre!

I'm always up for a fragfest.

Ill try and shoot for something next week. Shooting for a launch of a pretty cool new feature this Saturday and a few other cool CG bits so the fragMENTATION will be next weekish.

I just jumped in for a warm-up session. Holy knight, did I get beat down.

Did you set the bots to some low skill level? You can also toss in mutators like "Big Head" that will make players that do well MUCH easier to headshot :D

I think I was playing actual humans, but they seemed way too good. Not that I doubt people are probably amazing at that game, but still. At one point, I think I died 5 times in about 5 seconds.

I bought the Unreal pack in last year's Summer Bundle. I'm 100% Linux at this point, though, so it's UT2004 only until the rest are brought over. Fingers crossed that older titles like this one get the Steam Linux treatment.

There are binaries for all UT games from 2004 backward. I dont know if its in Steam yet, but really should be brought to it.