The 2016 Cheerful Ghost Game of the Year Award Winners! 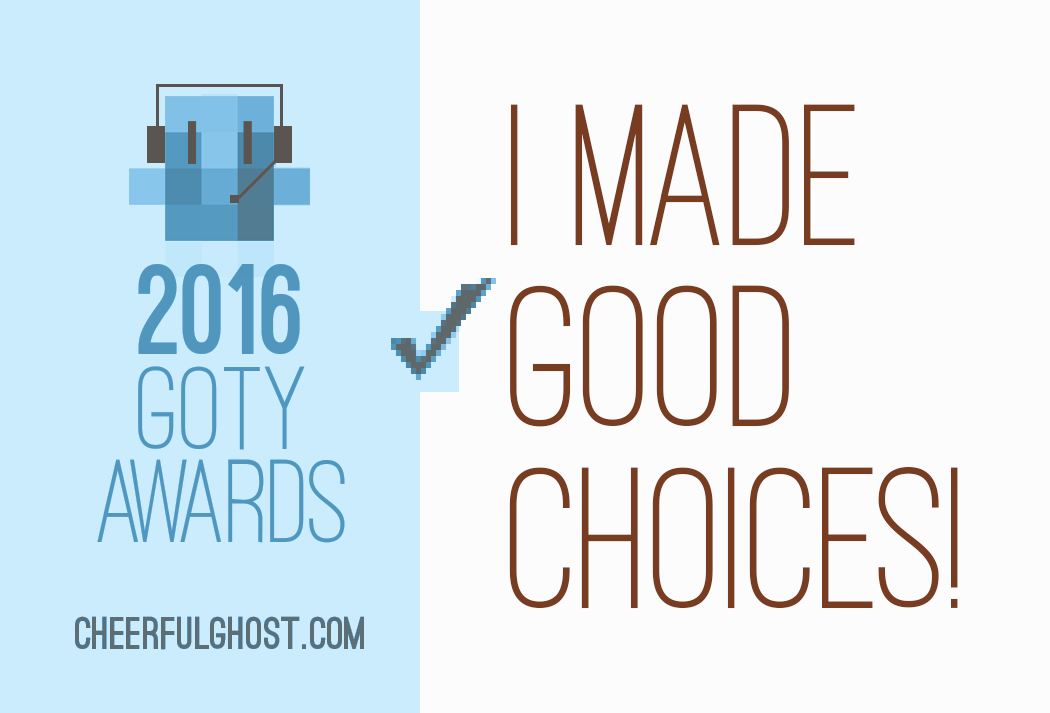 I want to thank everyone that voted in this years 2016 Cheerful Ghost Game of the Year Awards. This year Scrypt made us a cool "I Voted" image linked above that you should checkout, print out and stick on your wall if you voted.

This years winners are a very unique mix I am really happy with. I am not sure most sites would have made the choices we all did which is one of the reasons why I think our awards are different.

Triple A Game of the Year: Doom

Indie Game of the Year: No Man's Sky

DLC/Update of the Year: No Man's Sky Foundation Update

Runner Up: Hearthstone Whispers of the Old Gods

If you want to look into what games took the awards for the last couple years, check out the links below. I am really happy with the games that won in years past as many of them I still play to this day.

I only picked winners! :) And yes, I agree that's a great graphic by scrypt!

I voted for Super Mario Run for the best mobile game. While it has problems (incredibly frustrating ones) I find it to be very fun. Pokemon Go also has problems, probably even bigger ones, but it deserves the win. It had a huge impact.

I voted for Pokemon Go because I finally have an Android smartphone, which means I can finally play it! :)

I'd like to offer some observations. As for our small beloved group, I think NMS is our game of the year. Remember when many of us were blowing up the event's comments section and we had to switch to two forum posts? I think we talked more about NMS in 2016 than any other game and there were many of us involved in that. I am glad that we did not succumb to, promote, or expand the negativity it received from what seems to be a lot of other gamers. I'm not saying we called it a perfect game, but we still enjoyed it (and still do).

I also am thinking about the games that I saw most played by my Steam friends. There are very few of them (friends and games). Many of my friends (I'd say about 4 of them) played a lot of Ark, as I did, too. I also saw one or two playing Rocket League often. One of my friends also played Overwatch a bit, which isn't a Steam game, but you know we can add non-Steam games to our Steam library.

Anyway, I just thought I'd give those observations. I would invite anyone else to give their observations as well.

I wouldn't call it our game of the year exactly but it's definitely our most discussed. Much of that was due to how newsworthy it was.

A lot of that negativity was warranted. But like everything on the internet, people took it waaaaaay too far.

I think the thing is that I didn't know anything about NMS until it came out. Then I realized we had an event going on about it and I read what was posted there and looked at some of the links that were posted as well. Then I decided to jump on the NMS bandwagon and join the event. I think many other people had heard about the game much earlier than I did and were actively following the news of it. So, their expectation of it was much higher than mine. Therefore, I was not as disappointed as they were. Granted, I still have in mind that one quote I read some that it was "as big as an ocean, but as deep as a puddle." I thought that analogy was fitting, until the Foundation update was released. Then, that "ocean" got much "deeper" and the game got much better. I still have things to do with it. I only stopped playing recently to get into Ark's holiday event. Since Ark has updated, I have more to do with it. Then, I might go back to NMS and continue what I was doing. The game can still get a bit dull after awhile, especially if you decide to try to locate all the creatures on a planet to get that discovery bonus. That part is still sometimes difficult. I'd like to see something, perhaps a scanner upgrade, that helps you locate the various creatures more easily.

It's nice to see NMS win something somewhere ;)

I saw Picard last night and the first episode was...